A meticulously rehabbed Union home offers lessons for anyone embarking on a renovation of one of Maine’s senior residences.

Topsham architectural historian Scott T. Hanson couldn’t find a book on renovating old houses that, as he puts it, “prioritizes the identification and preservation of their character-defining features as a starting point” — so he spent the last four years writing one. The result, Restoring Your Historic House: The Comprehensive Guide for Homeowners, is packed with hundreds of step-by-step photos, illustrations, charts, and decision-making guides, as well as photo essays on 13 well-preserved homes representing a range of periods and styles. Ten of these are in Maine and one is illuminated in this exclusive adapted excerpt. 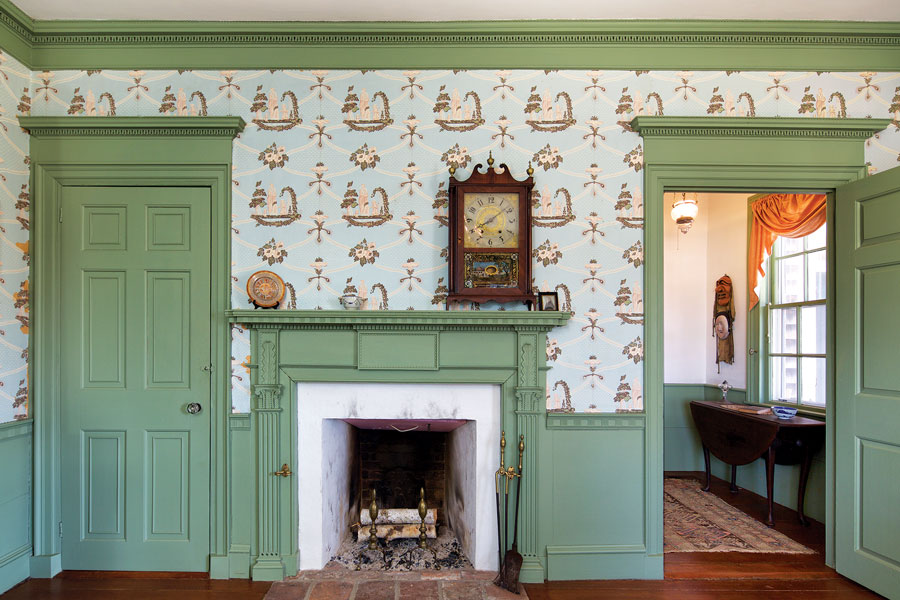 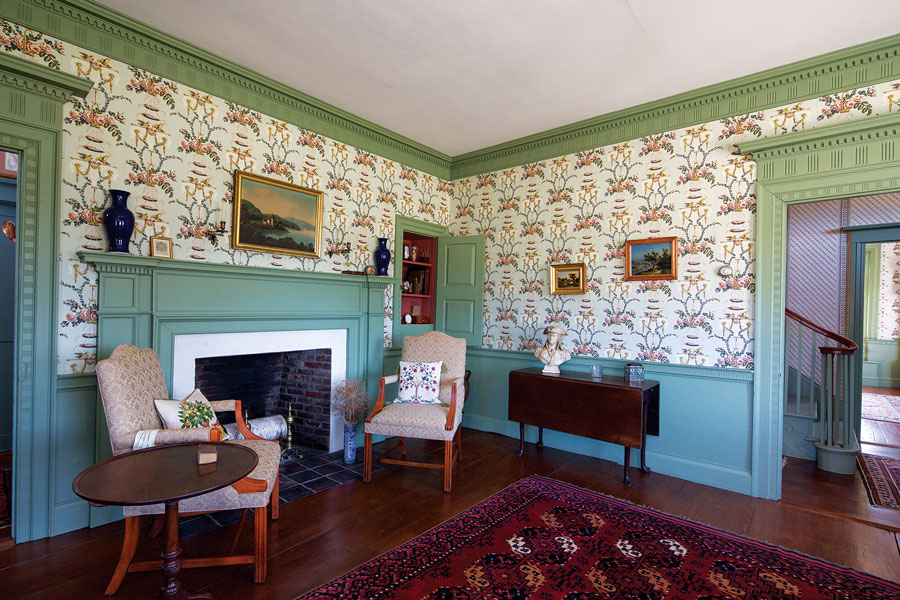 ABOVE A formal parlor in Union’s Alden House features elaborately carved woodwork, period-appropriate plaster fireplace parging, and reproduction 19th-century wallpaper with a neoclassical motif. The “second-best” parlor, used by the Alden family, is slightly less ornate than the formal parlor reserved for guests.

Built by a Massachusetts-trained finish carpenter and wood carver in the frontier region of Down East Maine in 1797, the Ebenezer Alden House was exceptionally stylish and up-to-date for its remote inland location. Alden, descended from Mayflower passengers John and Priscilla Alden, initially came to coastal Thomaston to carve interior trim for Revolutionary War general Henry Knox’s mansion, Montpelier. Constructed by Alden’s employer, Boston housewright Ebenezer Dunton, it was the grandest and most fashionable residence in Maine when it was finished in 1795. Upon its completion, Alden purchased property nine miles north, in Union, on which to build his own home.

Thirty years after the conclusion of the French and Indian War removed the threat of violence that had stymied settlement of interior Maine for 150 years, small towns were being settled and developed throughout the territory, primarily by young people from Massachusetts who were descended from 17th-century Puritan immigrants. Twenty-four-year-old Alden built a small house and store to serve the growing community before beginning work on a larger residence.

The new house featured a rather old-fashioned plan, with four large rooms on each floor flanking a wide center hall. The rooms on the south side received the finest interior treatment, with elaborate Federal-style cornices, mantles, and door and window trim on the first floor and somewhat simpler expressions on the second. The staircase and front hall also featured elegant, modern detailing. On the north side, simple, beaded-edge board partitions separated rooms with Georgian-style paneled fireplace walls from the back halls. A lean-to shed off the rear of the house was probably an early woodshed. Attached to it is a story-and-a-half gable-roofed ell — the original house built by Alden that he likely continued to operate as a store. The impressively large home suggests that he came to Maine with substantial resources and wanted to show off his carpentry skills to potential clients in the bustling community. In this he was apparently successful, as several other houses identified as having been built by Alden survive in the region. 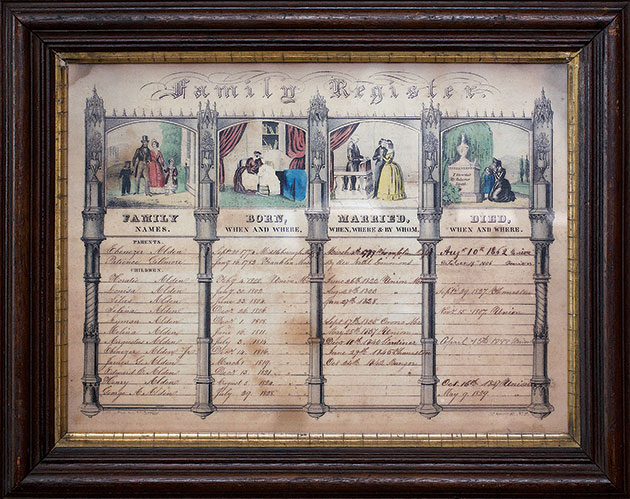 Like most men in rural Maine at the time, Alden was a farmer, as well as a craftsman and an entrepreneur. He is recorded as having the first wool-carding machine in town, in 1806. This was operated by waterpower from the nearby river in a small wooden mill building. In 1813, he was appointed postmaster for the community, a title he retained for 32 years. From 1809 to 1827, he served as coroner. For several years in the early part of the 19th century, he manufactured potash — an element derived from wood ashes used for bleaching wool and in making soap and glass. While undertaking all these activities, he and his wife, Patience, had nine sons and three daughters.

Originally, the house likely had a fashionable low-hipped roof. The current high-gabled roof in the Greek Revival style was an update, possibly added by Alden’s son, Augustus, who inherited the house after his father’s death in 1862. Augustus also built the existing barn around 1868. Additional interior alterations were made during the Victorian period and the house remained in the Alden family until 1965. 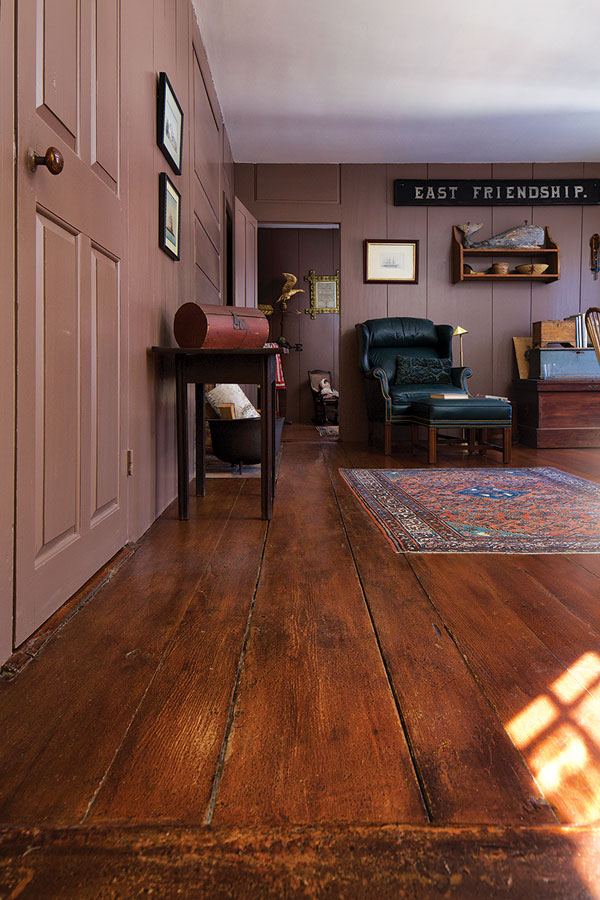 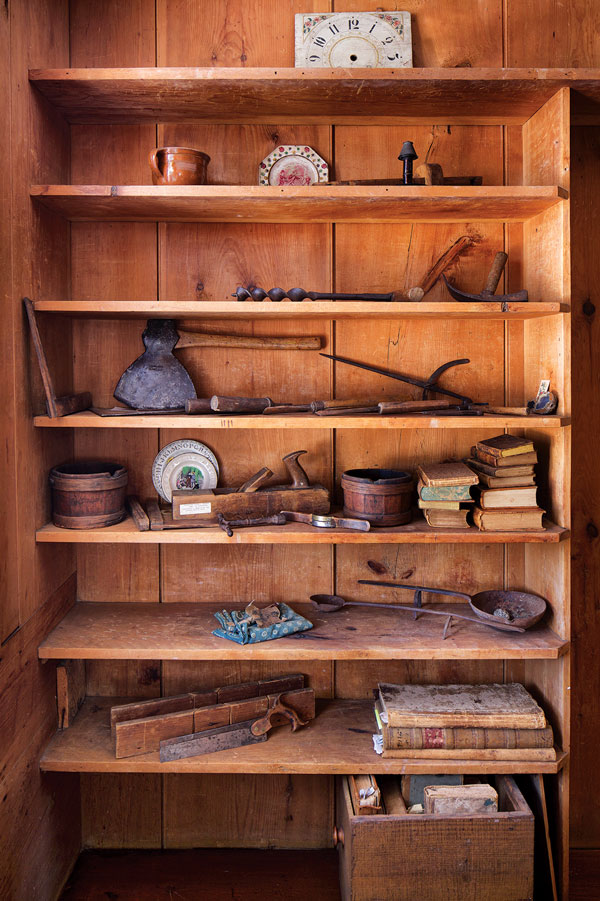 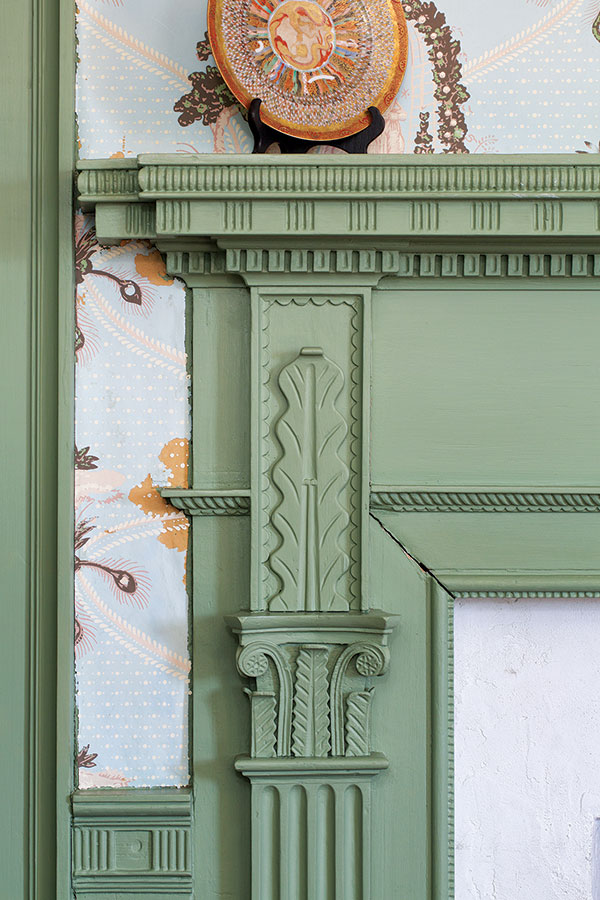 ABOVE A simple “back” bedroom in the Alden House might have been a nursery. Many of Ebenezer Alden’s tools remain in the home. Alden carved the mantels.

The next owners were Hazel and Joseph Marcus, who were in their early 50s when they moved from New York, and spent three years restoring the house. It had fallen into disrepair when they first saw it on an antiques shopping trip to Maine in the early 1960s. Several years later, Hazel noticed a “for sale” sign when passing by. She called Joe in New York, who flew to Maine the next morning. As he remembered it 30 years later, when he walked into the dining room and saw the carved mantel, he said, “I’ll take it!”

Many photographs survive from the 1960s restoration, making clear that the work was done with care to preserve as much original material as possible and accurately replicate what was lost. Fortunately, original doors, paneling, and other elements had been stored in the barn when they were removed for Victorian-era updates. These were returned to their initial locations, and missing pieces were reproduced using Alden’s own tools in some instances. Accordion lath-and-plaster walls were removed from the vertical board paneling in the rear of the house — the boards were painted before the lath was installed, indicating that they had been the original exposed surface.

The original chimneys had been taken out and fireplace openings sealed up when smaller chimneys with Italianate tops were installed to serve the cast-iron stoves that became the means to heat the house in the mid-19th century. During the restoration, the fireplaces were reconstructed and the chimneys rebuilt in their original sizes and shapes. Throughout the house, painted pine floors were carefully stripped and varnished. Paint analysis was undertaken to determine the home’s original colors and the interior woodwork was refinished in the blues, greens, and maroons present during Alden’s time. Eighteenth- and 19th-century reproduction wallpapers by historic wallpaper authority Nancy McClelland enliven the most significant rooms. The shed was rehabbed to accommodate a modern kitchen and baths. And the entire house was rewired, with electric radiant heat installed in the newly skim-coated plaster ceilings.

When the work was completed in 1968, the Marcuses moved their notable collection of antique furniture from New York and settled in. Soon afterward, they opened an antiques shop in the ell where Alden’s store had been, turning it into a nationally known destination for antiquarians for 25 years.

In 1997, another pair of antiques enthusiasts, Dave and Suzy Shaub, bought the home. One of their first decisions was to repaint some of the woodwork in contemporary colors — a move Dave calls the worst mistake he made with the house. Eventually, period colors were returned to the rooms. Subsequent renovations were spot-on. The rebuilt brick fireplace surrounds, for example, were left exposed during the prior restoration, in keeping with the scholarship and expectations of the 1960s. With more recent study making clear that the brick would not have been visible in a house of this quality, the Shaubs had it appropriately parged with plaster.

To lower their heating bills, they installed an oil-fired hot-air system for the first floor and added eight inches of insulation in the attic. Heat for the second floor relies on rising warmth, with occasional backup from the old electric radiant system when needed. In the angle between the main house and shed, they added a large screened porch to extend their enjoyment of the side yard through “bug season.”

After more than two decades of ownership, Dave and Suzy have decided to downsize and move closer to family. Thanks to their care and efforts, the 222-year-old Ebenezer Alden House has recently been passed on to new stewards in excellent condition, ready for another century. 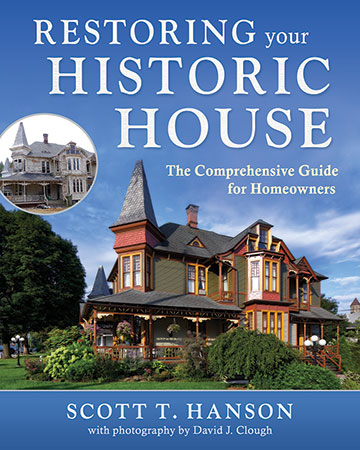 Scott T. Hanson’s Restoring Your Historic House: The Comprehensive Guide for Homeowners (Tilbury House Publishers) is available for pre-order on Amazon and will be released on November 12. He is also the author, with Earle G. Shettleworth Jr. and Christopher Glass, of Homes Down East and of Cleaning Historic Staffordshire Transferware. To learn about upcoming book signings and presentations, visit yourhistorichouse.com.

Scott T. Hanson has been involved in historic preservation since age 11, when he helped restore the 1874 railroad station in his hometown of North Conway, New Hampshire. He has since served as a preservation planner for the city of Portland, as well as a professional carpenter, painter, and designer, and is currently an architectural historian and consultant on historic rehabilitation projects. For the last decade, he’s also been restoring his own historic dwelling, the 1828 Whitten House in Topsham, where he lives with his husband, four Maine coon cats, a reconstructed 19th-century beehive oven (where he once cooked a full Thanksgiving feast), and 500 pieces of 19th-century transferware (yes, there is a national Transferware Collectors Club and, yes, Hanson is its president). Here, Hanson has spent much of the last four years downloading the contents of his encyclopedic brain into a readable tome for fellow historic-house junkies.

Even in a state known for its Puritan work ethic, yours seems next level. Why write this book?

My standard answer is that I waited 30 years for someone else to write it and no one did. But I think my background also makes me ideally suited to writing this book because I’ve come at the subject from so many different angles. I did a fair amount of research to learn more about things I knew something about or to confirm what I believed was the best approach hadn’t been superseded by a newer, better approach because preservation evolves. But the vast majority of the text is from my own experience and education.

You have 720 pages of material rattling around in your head?

Of course, that was the point. People are constantly asking me questions about how to work with an old house in appropriate ways. So instead of repeating myself, I thought, ‘why don’t I just write this down where people can go and find it?’

Amazon turns up more than 3,000 how-to books on old houses. What distinguishes yours?

The focus has generally been on, how do you incorporate all of the currently desirable features in an old house? And, to put it simply, shiplap siding doesn’t belong in a Victorian house. Owning an old house should be about appreciating what the house is, prioritizing its character-defining features, and making the changes you need where those features aren’t. That’s my focus.

Can you put ‘character-defining features’ in context?

These are the elements that say, ‘this house was built in this style at this time.’ On a Federal-style house, they probably include a front door with side pilasters and a transom. On a Greek Revival, that same front door probably has sidelights and a transom. Without understanding that a Greek Revival door surround doesn’t belong on an Italianate-style house, people unknowingly make changes that confuse the identity of a historic house.

Should people be wary of the money pit factor?

There’s no disputing that a historic house requires more time and money than living in a vinyl box. But most people restoring them are not retired or rich. A theme of the book is providing people with information that will help ensure work is done correctly the first time, which is a big money-saving piece. Damaged plaster walls and ceilings are a great example. A lot of times people will be told by a contractor, ‘we have to take all this out and put in drywall,’ which is an inferior product and a very expensive undertaking. Whereas it’s usually possible to patch and reattach loose plaster for a fraction of the cost of replacing it.

In my own case, I’d like to believe I will be finished with construction projects in five years. But I’ll probably still be doing some work after that. For instance, my house has two 19th-century wallpapers I’d like to get professionally conserved and restored. But that’s beyond finishing the project. That’s taking it to another level.