When he first heard about Passivhaus, Germany’s rigorous energy-efficiency building standard, architect Matthew O’Malia thought, “That’s crazy: a foot-thick wall, all this insulation in the foundation, and triple-glazed windows? That seems like overkill.” At the time, O’Malia was designing high-end houses that incorporated advanced (for the U.S.) energy-saving technologies — things like passive solar and high-performance furnaces and appliances. But O’Malia and his friend and collaborator, builder Alan Gibson, couldn’t just dismiss Passivhaus, or passive house, which uses 10 percent of the heating energy of a conventionally built home: the science behind it is sound.

So in 2008, the two tested the waters by building their own passive house on spec — a barn-red contemporary riff on the New England farmhouse that they named the GO Home (pictured at left and below). The first house in Maine to be certified by the Passive House Institute US (PHIUS) and one of just 12 in the country at that time, the GO Home performed so well that it became the launch pad for GO Logic, Gibson and O’Malia’s Belfast-based design-build firm specializing in passive building construction. (See more examples of their work below.)

Since then, interest in passive buildings has grown slowly but steadily in the U.S., where there are now about 1,200 PHIUS-certified projects. Six of those were designed by GO Logic, including the nation’s first certified passive dormitory (at Unity College), and North America’s first certified passive laboratory (at the University of Chicago). This year, GO Logic launched the GO Home collection, a line of 10 prefab passive-house designs that can be assembled onsite in less than two weeks. We sat down with O’Malia for a crash course in what passive-house technology is — and where it’s headed.

Q: What is a passive house?

A: Passive house is so simple that it’s easily overlooked. Instead of building a house that has a standard building shell, we build a highly insulated shell, in which the energy in the interior spaces created by day-to-day activities like cooking, lights, and appliances becomes the heating source. If we put enough insulation in the right places, we can reduce a building’s energy loss by 90 percent. And if it isn’t losing energy, it’s going to stay warm.

I like to give the example of mammals, like sheep: They have a very compact surface-area ratio, and they have a lot of insulation. Sheep can stand outside on the coldest days in winter and still have a warm interior temperature — they don’t need any extra heat, and they do great. When we look at an energy model and the physics of a building, we find that if we play with a few variables, increase insulation levels a little bit, and ventilate the building, the opportunity for energy savings, comfort, and lower operating costs is pretty amazing.

Q: Wait — are you saying a passive home has no heating system?

A: In some climates that’s true. Typically in Maine, we do have a heating system. It’s just that the amount of heat you need is so low. We’re doing electric-heated homes because — this is what’s crazy — the heat you’d need to keep a 2,000-square-foot passive house at 70 degrees on a windy, below-zero night is equivalent to running a hair dryer through the night — about 2,000 watts of continuous heat output. So, yeah, you need a heating system, but you can just have a little electric baseboard in each room, which is incredibly cheap. We choose a heat pump when air conditioning is desired because it provides both heating and cooling.

Here’s a great anecdote that one of our clients in Belfast shared: “On a winter day, after the sun goes down and things start to cool, I like to bake cookies, and then the house is warm again. Everyone feels good because not only are they warm, they have cookies too.” It illustrates the margin of energy that you need, which is pretty small.

Q: If passive houses are so simple, why has it taken so long for us to develop the technology?

A: We have a set of expectations for how we build that we brought with us from other places — England mostly, where the climate is milder, and when it was cold, you’d use a heating system, like coal, natural gas, or oil. In the nineties, when I was doing a lot of higher-end residential projects, we tried using passive solar, but the understanding of how energy works in a building and how good it could be was just not there. When Alan and I started with passive house, we had to figure it out — what the wall systems, windows, heating systems, and ventilation systems needed to be in order to achieve a high level of efficiency. It became clear that once you understand what you’re doing, once you get that extra insulation and ventilation system installed correctly, it’s the same building that we’ve always been building. We’re just trading one technology for another.

A: The concept actually came from Saskatchewan, Canada, in the 1970s, the era of the Jimmy Carter energy embargo. Tons of people made highly insulated solar houses at that time. They did a lot air sealing, and they did a lot of layers of glazing. The problem was, they didn’t ventilate the houses, so you had all this moisture, and it went into the walls where it rotted the wood and created mold. So not only were the houses uncomfortable, they were unhealthy. That put a pretty significant stigma on this type of construction.

Harold Orr, a physicist, is the vanguard of what this technology has become today. He designed the Saskatchewan Conservation House, which had super-insulation and triple-glazed windows that he made himself. But most important, Orr is brilliant because he made a heat-recovery ventilation (HRV) system to blow stale, polluted air out of the house and uses heat from that outgoing air to warm up fresh, cooler air coming in from outside. It wasn’t a totally new concept in buildings, but he was the first to use it so explicitly to improve indoor air quality. It took another 30 years, in German hands mostly, to develop the science. The collective work the Germans did, the refinements they made, and the very specific planning they did around moisture in the building envelope represents a huge leap in quality, comfort, energy savings, and sustainability.

A: Apples to apples, passive construction is usually around 6 percent more, but I always like to qualify that: When you’re looking at a regular custom house, that 6 percent can easily be offset by the choices you make for allowances, such as  countertops. In addition, the payback on that 6 percent is so short — like 8–12 years, depending on the cost of electricity. Solar panels have the same payback, but look at the long-term benefits: the house will be there for 100 years; solar panels have to be replaced after 25 years.

So, yes, there’s an upfront cost. In some cases, it’s just not part of someone’s budget, and I totally get that. Others are committing to this goal and maybe making the house slightly smaller or being smarter about how they plan rooms. The more we can quantify the benefits — in health, operational costs, long-term savings, sustainability — the less people will view this technology as a choice. Our focus is on finding ways to make the technology as accessible and cost-effective as possible. To that point, we have different GO Home models that are already packaged up and ready to go. They take a lot of the design costs out of the equation.

Q: Do you need special windows for a passive home?

Q: What are some common misconceptions about passive homes?

A: When passive houses first started getting press, people were saying, “Next, we’ll have to live in hermetically sealed Styrofoam boxes and the air will be terrible.” A lot of people think that to make steps forward in sustainability is to give something up, when actually, it’s a win–win. We can have much higher sustainability, while also improving the quality of the air, the connections to views and light, and the operability of the building shell. Our buildings have a New England scale but we do really big windows because they’re good for solar and because we like natural light. We like interior-exterior connections. We like views. And, of course, we ventilate with HRV, so the air is improved. So it’s not a hair shirt. We’re not being punished. The next step is actually quite beautiful.

Q: Can you turn an existing home into a passive house?

A: I live in a 100-plus-year-old Cape in one of Belfast’s old neighborhoods, because we love the scale and feel, the community, and the walking distance to work. For me, and others in my situation, we’re only going to get so far in sustainability measures, and how far we get is going to be based on the condition of the house. If the siding needs replacing, that’s a good time to add a little insulation or get some air sealing done. If the windows need replacing, that’s a good time to improve the quality and make sure they’re well sealed. The improvements that you can incorporate are based on the house’s needs. If the siding is in good shape and it has beautiful millwork, you’re crazy to rip it off to put some insulation in. With new construction, we have lots of options, but with renovations, we have to be smart about what we have and how we treat it. Being dogmatic about anything is never helpful. That said, I’ve been constantly improving our house’s thermal performance. We have triple-glazed German windows — they outperform the walls and it’s a little silly, but we really love those windows!

Q: How does passive construction compare with other high-performance buildings — say, net-zero homes, which employ technologies like solar panels to create or even exceed the energy they use?

A: Passive house is the first and best step in that long game of getting to net-zero — you do the things now that are very difficult to do later, such as insulating well and putting in good windows. Solar panels are easy to put on later. If you start with a huge solar array but don’t take the building shell far enough for whatever reason, it’s like putting your underwear on the outside — it doesn’t make sense. You can’t retrofit that building later to perform any better than it already does.  Our goal with all our buildings is that they’re producing their own energy onsite 20–30 years from now.

As an architect, I view my role as setting in motion a building’s performance for the next 30 to 100 years. Think of how much has changed in the last 30 years — how we used to build, what cars were doing, what the environmental situation was. Imagine 30 more years of that. We know where we’re headed — that net-zero goal — so the best thing to do is build a building that’s going to be ready for whatever the next decades bring. Solar technology will change, but the building shell stuff is straightforward science. It’s never going to change. If we get that right, the building will always be appropriate. 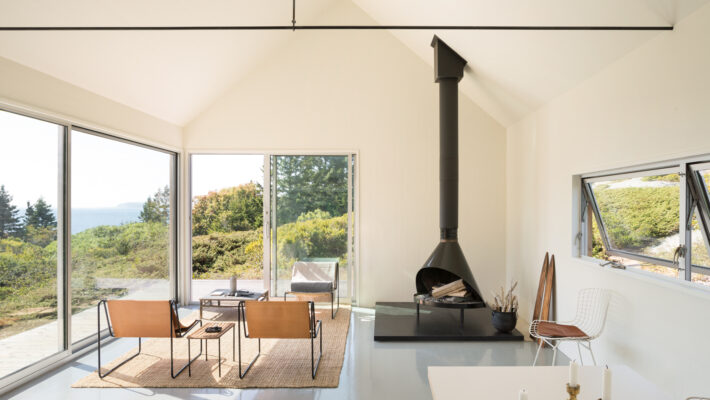