ABOVE Rachel McCleary tends to the moss garden next to her home. “She has created a park in the center of Camden,” says McCleary’s gardener and collaborator, Kate Mcleod.

Rachel McCleary spends spring mornings kneeling in the woods by her Camden home, plucking fallen leaves off the forest floor by hand. A rake won’t do. It could damage the mosses she’s been propagating and babying for the past few years. Where barbed wire, trash, and construction debris once lurked, a thick, emerald and chartreuse carpet now rolls over rocks and roots in all directions. “I did it by sheer will,” McCleary says, laughing.

Pretty much everything else on the 6-acre property has been similarly transformed since McCleary and her husband, Robert Barro, both Harvard University professors, purchased their hilltop home seven years ago. Designed by Camden architect Christopher Glass in the 1990s, the house’s Shingle-style exterior and contemporary interior suited them — it’s their second home, and eventually they’ll retire here. The landscaping, on the other hand, was virtually nonexistent.

“It was a nightmare,” says Belfast garden designer Kate Mcleod, who was enlisted to help make the grounds worthy of the dwelling. Besides the refuse that had been dumped on a wooded slope, Mcleod recalls, mud and prickly weeds dotted the lot, and the forest was threatening to swallow the house.

So how did such a neglected yard become the star of last year’s Camden Garden Club tour? Synergy, McCleary tells me on a recent visit. “Kate focuses on the perennials, I focus on the woods and moss garden, and we help each other a lot.” Plus, Mcleod interjects, “Rachel works nonstop.”

They collaborated on the design from the beginning, when they agreed that 100-odd invasive Norway maples had to go. In their places went balsams, Fraser firs, and white pines. To break up and nourish areas of severely compacted soil, Mcleod used cardboard (“earthworms are crazy for it”), topped by compost and llama manure. “Then,” she says, “we started planting.”

ABOVE Purple coneflowers animate a stone retaining wall. BELOW A once-swampy area is now a nook hidden among hydrangeas, nishiki willows, and weeping spruces. 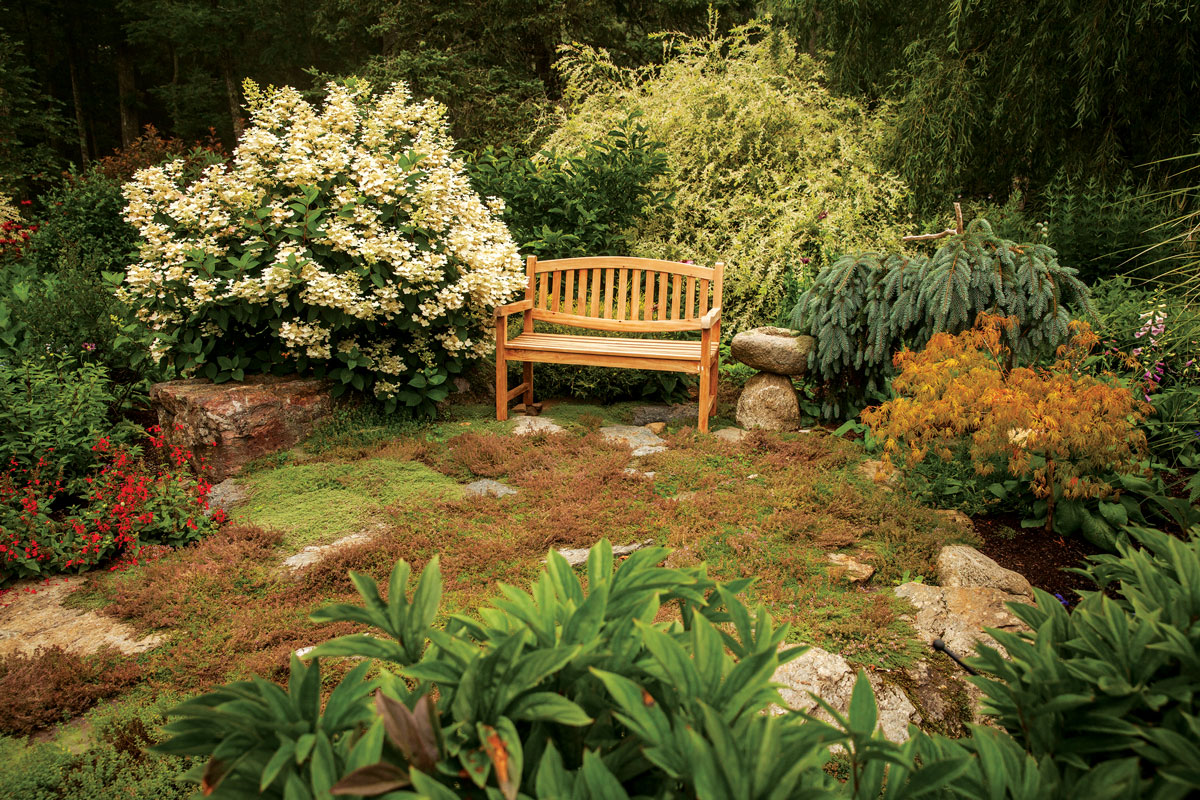 LEFT TO RIGHT McCleary pauses on a path lined with bee balm, black-eyed Susans, daylilies, salvia, and yarrow; a trail with stone steps and a branch railing descends into the woods; some of McCleary’s brilliant blooms; an arbor marks the transition from yard to woods.

ABOVE McCleary pauses on a path lined with bee balm, black-eyed Susans, daylilies, salvia, and yarrow; a trail with stone steps and a branch railing descends into the woods; some of McCleary’s brilliant blooms; an arbor marks the transition from yard to woods.

Today, ornamental gardens are nearly everywhere the woods are not. A once-swampy area beside the driveway is now a private garden, in which a cedar bench sits on a stone patio covered in wooly thyme. It’s hidden by a screen of trees and shrubs (water-gulping nishiki willows, droopy-branched Norway spruces), perennials (bee balms, foxgloves, hydrangeas, Shasta daisies, and more), and self-sowing annuals (purple poppies, red salvias).

Behind the house, a raised lawn supported by a stone retaining wall offers a view of Penobscot Bay. A row of pink fairy roses and purple catmint defines the wall’s top edge. Below, a steep slope is a tangle of sown and wild plants, like ferns, lupines, Queen Anne’s lace, and Siberian irises. From one end, a stone path curves around the house between beds of black-eyed Susans, coneflowers, daylilies, and delphiniums. Clouds of bees, butterflies, and hummingbirds drift among the blossoms.

A side path descends into McCleary’s forest garden, where she’s planted hay-scented ferns, rhododendrons, and, of course, the mosses that soften nature’s hard edges. Mosses are notoriously difficult to establish, but McCleary studied them and spread them one transplanted chunk at a time, tenderly pressing each piece into the soil, moistening it until it took root, pinching away weeds, and persisting until a glorious tapestry billowed beneath the trees. 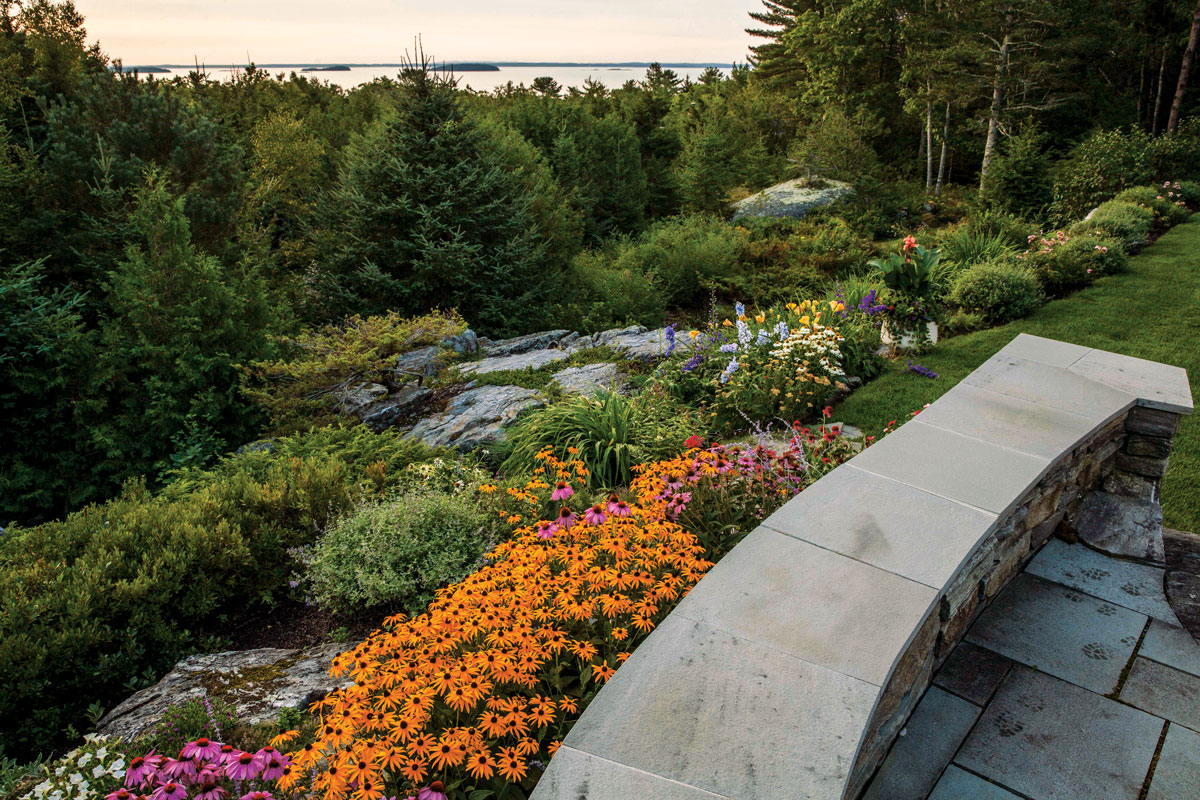 ABOVE A stone terrace, built by Belfast’s Cold Mountain Builders, provides a view of Penobscot Bay. Partially obscured by black-eyed Susans and coneflowers is a stone path that curves around the house.