From the January 2018 issue of Down East magazine

The longhouse is embedded in architect Eric Reinholdt’s aesthetic. As a boy growing up in Cooperstown, New York, he learned about the Iroquois’ communal dwellings from his father, a museum education director. Long, narrow houses are deeply rooted in his Norwegian and German heritage too.

It made sense, then, that the form sprang to mind when the wooded lot he and his wife, Laura, purchased in the town of Mount Desert presented challenges. “Most of the site is wetland, so there’s very little buildable area,” he explains, “and because there’s only one spot from which we could enter from the road, it also dictated the house’s orientation.”

At 20-by-80 feet, the Reinholdt home is roughly the same length and width as, say, a small ranch with attached garage. An unconventional footprint calls for an unconventional layout. Common spaces — living area, dining room, and kitchen aligned in an open floor plan — occupy the building’s middle. Bedrooms are tucked at either end: Eric and Laura’s room and small bath are on the opposite side of the living room’s only interior wall. Small side-by-side bedrooms occupied by the Reinholdt children, Henning and Sig, are at the end of two corridors that run along the outside walls from the kitchen. Sandwiched between the hallways are a pantry/mudroom and main bathroom.

A tight budget of $113 per square foot influenced Reinholdt’s design, as well as his choices for fixtures and finishes. (In Maine, new construction averages $115–$170 per square foot, according to business data website ProMatcher. Reinhold, who did much of the work on his home himself, advises clients who want to build something similar to expect to pay $250-350 per square foot.) “We were trying to economize anywhere we possibly could,” he says.

The Reinholdts’ super-insulated home has radiant floor heat, but the woodstove keeps them so cozy they rarely use it. Pre-finished hardwood flooring, stained teak, kept costs down as did inexpensive Behr paint for the walls — Granite Boulder in the bath, kitchen and mudroom, and Swiss Coffee, Eric’s favorite white, everywhere else.

He chose “the cheapest way to frame a house” — a trussed roof, which has the added benefit of allowing flexible room arrangements because it requires only two load-bearing walls. Interior partitions can go pretty much anywhere, and they’re easily removed if a space no longer suits the family’s needs.

The Reinholdts have made adjustments in the 10 years since they built the house. They discovered, for example, that they needed more closets, a deficit remedied by converting a desk nook. “As a young architect testing and trying things, I treated this house as a kind of experiment,” Reinholdt explains. He now sells plans for longhouses that incorporate what he’s learned from living in the original.

Cabinetry and closets are mostly freestanding — and thus movable — and almost exclusively from Ikea, which suited not only the Reinholdts’ budget but also the house’s sleek, minimalist style. Most fixtures are basic but often used innovatively. The wall sconces, for example, are industrial landscape lights that cost $10 apiece. The bathroom’s clerestory windows are Ikea glass cabinet fronts rotated 180 degrees. “This is not expensive stuff by any means,” Reinholdt says. “The idea was to make simple gestures and make them feel custom and built in.” 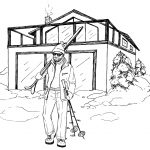 Holy Smokes!
We use cookies to ensure that we give you the best experience on our website. If you continue to use this site we will assume that you are happy with it.Ok