A father designs an accessible, energy-efficient home for his quadriplegic daughter.

Wander around Portland’s Oakdale neighborhood, and we bet you’ll notice 363 House. A silver-and-tangerine pop among staid Victorian homes, it has corrugated galvalume steel siding where its neighbors’ have cedar clapboards, crisp right angles instead of scalloped trim. A wrap-around porch? Not unless you count the ipé (Brazilian hardwood) deck with a stainless-steel cable rail atop the garage. Yet this thoroughly modern house’s profile fits companionably into Oakdale’s historic aesthetic — it’s a simple, two-story, pitched-roof building, not a showboat at all.

Operating at near net-zero energy, thanks in large part to a 7.2kw grid-tied solar electric array, 363 House (that’s an address-inspired project name that stuck) is not only a model of cutting-edge green design but also the product of one architect’s two-decade journey to build the ideal home for his daughter, Jessica Russell, and her family, husband Todd and son Louie.

“This is kind of the culmination of what I have been spending my life on,” says John Gordon, who became a specialist in accessible design after a car accident rendered Jessica a quadriplegic. “I’m able to apply that knowledge and help my daughter and her family. It’s something I relish.”

Architect John Gordon has given equal attention to daughter Jessica’s needs, environmental impact, and aesthetics. Solar panels and a heat pump meet the super-insulated house’s energy requirements and provide security for Jessica, who, as a quadriplegic, has difficulty regulating her body temperature. Counters, drawers, and appliances are at wheelchair height. The galvanized steel staircase contributes to the open, airy feel, and a platform lift also accesses the second floor and deck.

After hundreds of hours of sketching, staging, and late-night brainstorming; two remodels (sometimes with Dad camped out in the living room doing the work himself); and a built-from-scratch home in Bucksport, father and daughter have figured out what works. They learned, for example, that the floor must be absolutely flat so Jessica, who has limited use of her upper extremities, can move her wheelchair with ease. That meant grinding down the concrete floor when the pour ended up uneven. It also meant eliminating raised thresholds by recessing the doorframes into the floor (the doors are hung so precisely that they just skim the floor). Sliding pocket doors maximize openings.

In the kitchen, Gordon installed a faucet over the stovetop to make it easier for Jessica to fill a pot for boiling. The bathroom is tiled throughout and has extra drains because, as Gordon says, “The whole room gets wet, so we’ve learned over the years.” 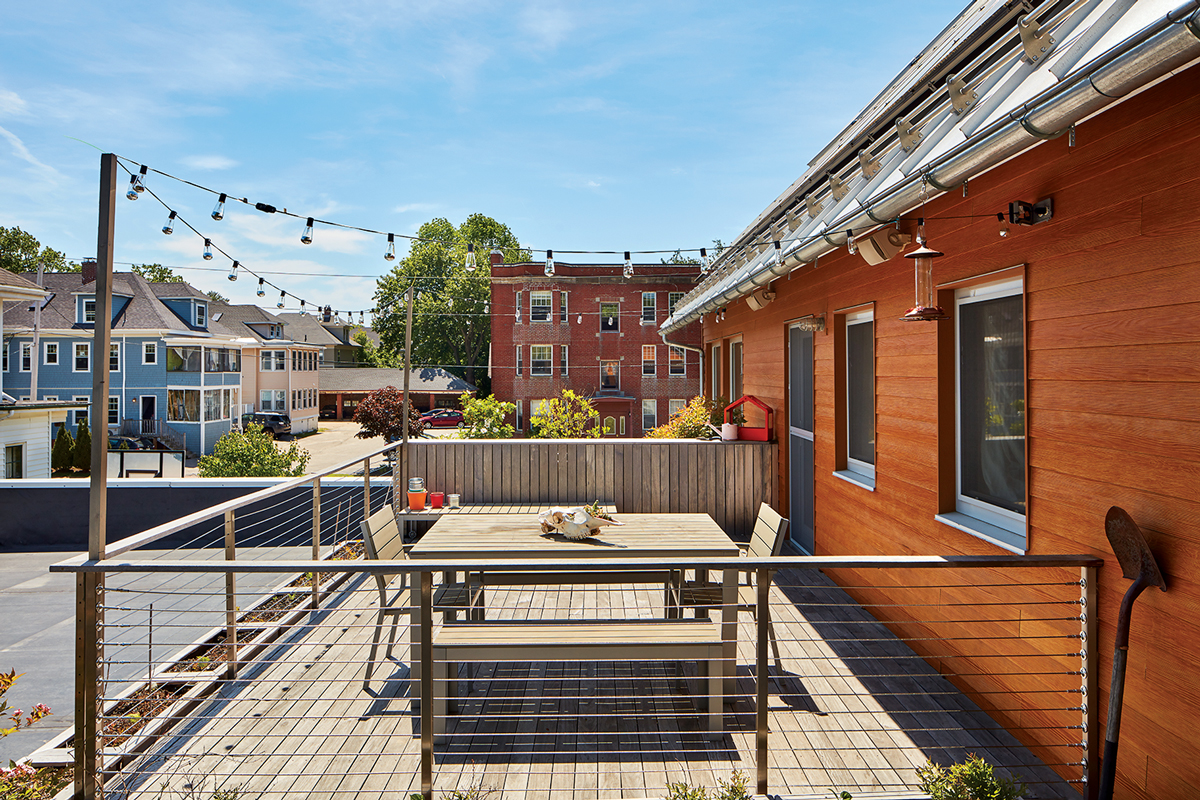 Trial and error has informed nearly every inch of the Russells’ airy, 2,000-square-foot home, which has three bedrooms and two studios — one each for Jessica and Todd, who work from home. The lift-accessible roof deck was Jessica’s number one must-have. Sitting outside, looking down at the sprawling Victorians that have long distinguished her neighborhood, she reflects on the challenges of living independently in houses like those. She’s tried it. But this house, a product of lessons learned, is perfect. Liberating.

“This is the last house,” she says. Her father, standing beside her, smiles. “This is it,” he agrees.