First up: how to scrape fossilized spitballs from a 135-year-old tin ceiling.

Amy Rees and Robert Lash knew it would require more than a little homework to turn a defunct 1887 brick schoolhouse into their dream home. When they took on the project in 2006, the former Gardiner Central Street School — decaying, boarded-up, and graffitied, its ceilings studded with hundreds of fossilized spitballs — had been mothballed for more than a decade. But Rees was sick of commuting from Windham to her automotive-repair business in Gardiner and Lash, a ceramicist and sculptor specializing in large-scale industrial metal pieces, was on the hunt for a studio big enough to create and house his work. The 10,000-square-foot schoolhouse, including a 6,000-square-foot 1960s addition he could use as a workspace, made the grade. “I thought, oh my God, this is fantastic!” he says.

The local Masons saved the schoolhouse from demolition and were using it for bean suppers, but were happy to hand it over for a pittance. At which point, the couple quickly learned their first renovation lesson: a bargain is not always a bargain. The Masons had removed all the classroom walls from the original building to create two large rooms divided by a wide central corridor. Rees and Lash tore out the corridor walls, as well as plaster on the perimeter walls, revealing patinaed brick. Drop ceilings came down too, exposing soaring pressed tin in need of major repair (including scraping off all those spitballs), as did the plaster on the corridor ceiling, where century-old hemlock joists are now visible. Unable to salvage the school’s maple flooring, they installed gleaming stained concrete with radiant heat, as well as towering new custom windows. 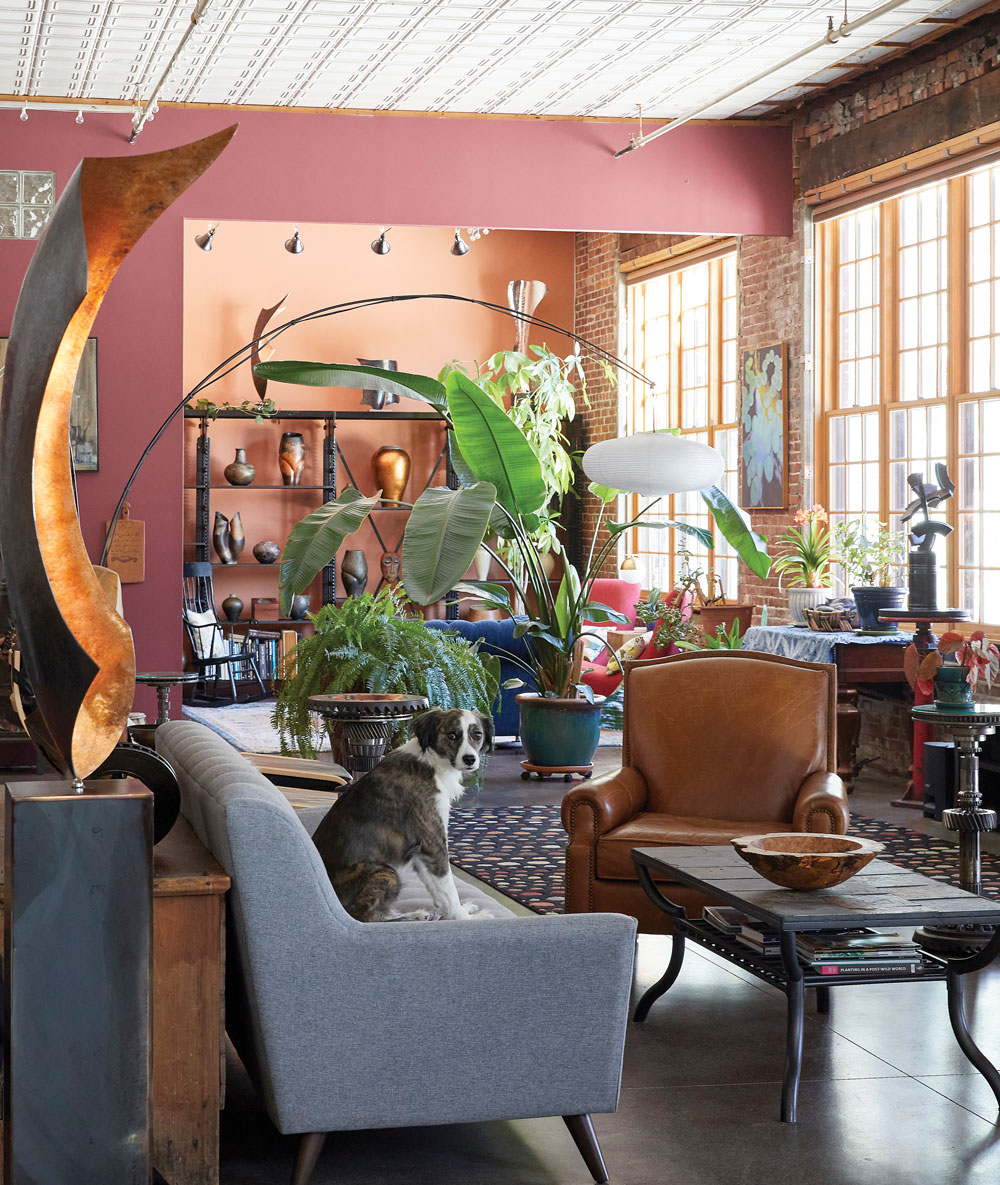 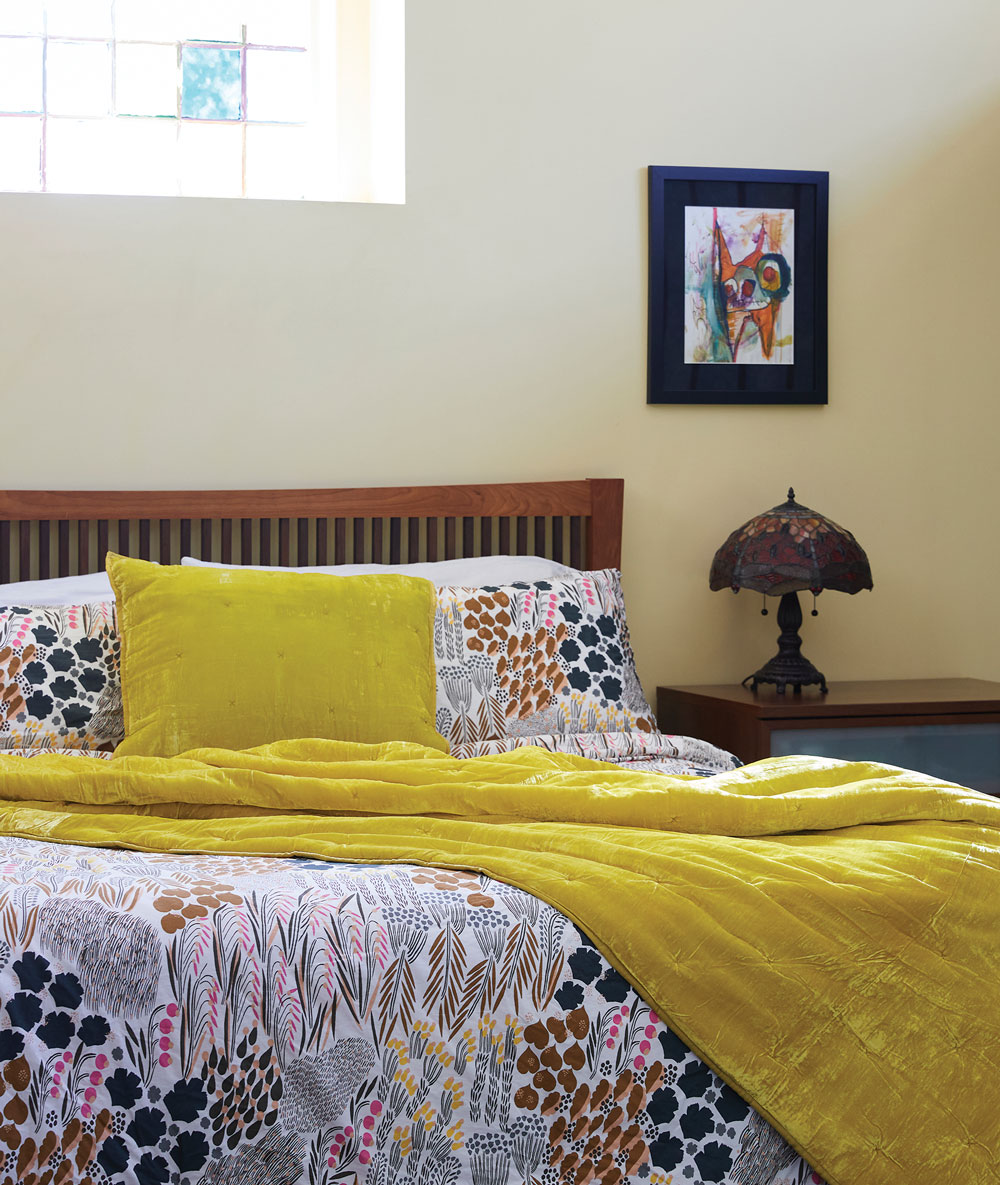 ABOVE 1) The swooping arm of an IKEA floor lamp and fronds of a banana tree help diminish the scale of the soaring living space, furnished with a Joybird sofa and vintage leather armchair. On the far wall, cast-iron shelves hold ceramics by Lash. 2) In the couple’s bedroom, floral and citron linens and a painting by local artist Adrienne Beacham reflect the colors in the original stained glass. “Discovering that window hidden behind plywood was like finding gold,” Rees says.

The addition had been tacked onto the schoolhouse’s original arched entrance (now set off with a half-circle forest mural), moving the entry to the rear of the building facing the parking lot. To enhance the approach, the couple replaced a pair of small doors with a 12-foot-wide expanse of glass, comprising French doors flanked with glazed panels, and reimagined the landscaping. Still, passersby didn’t immediately realize the place was no longer a schoolhouse. “We’d be eating dinner and people would just walk in saying, ‘Hey, I used to go to school here!’” Rees says.

A month after moving in, the couple confronted another lesson: life doesn’t always cooperate with renovations. Demolition was well underway when Rees was diagnosed with breast cancer. They continued to work, living in a cold classroom in the addition and using a former girls’ lavatory as a makeshift kitchen, while she recovered from surgery and treatment. Neither considered quitting. “I believe in learning lessons and not regretting, even if they were hard lessons,” Rees says. 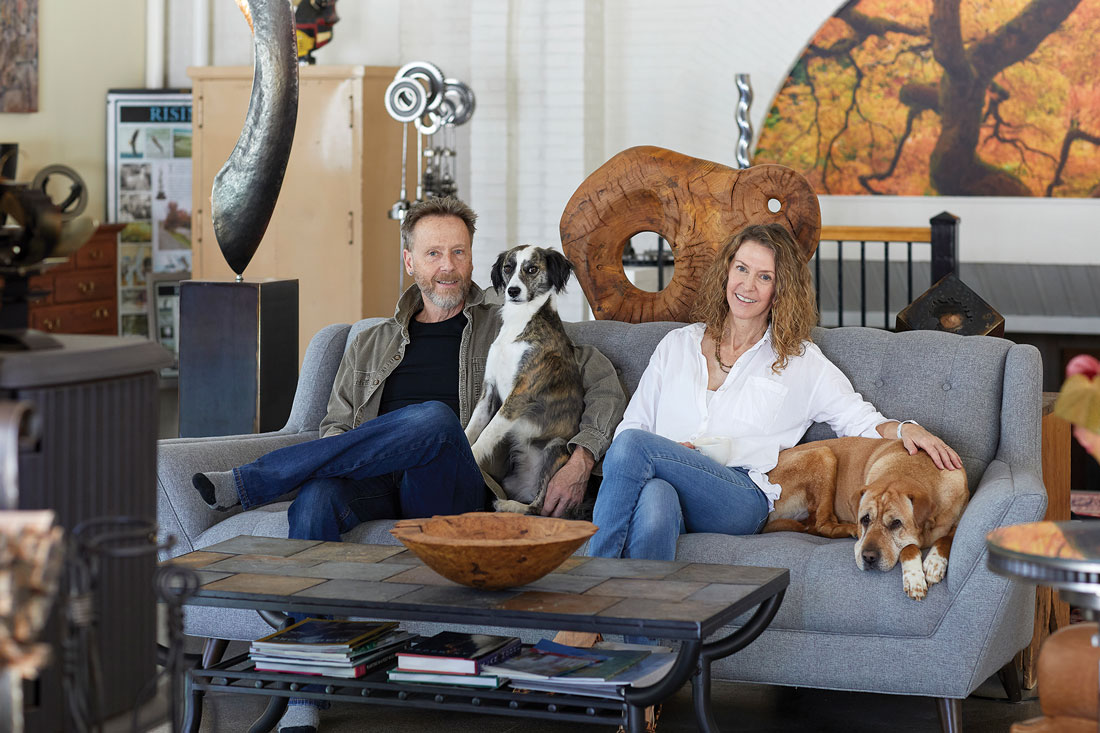 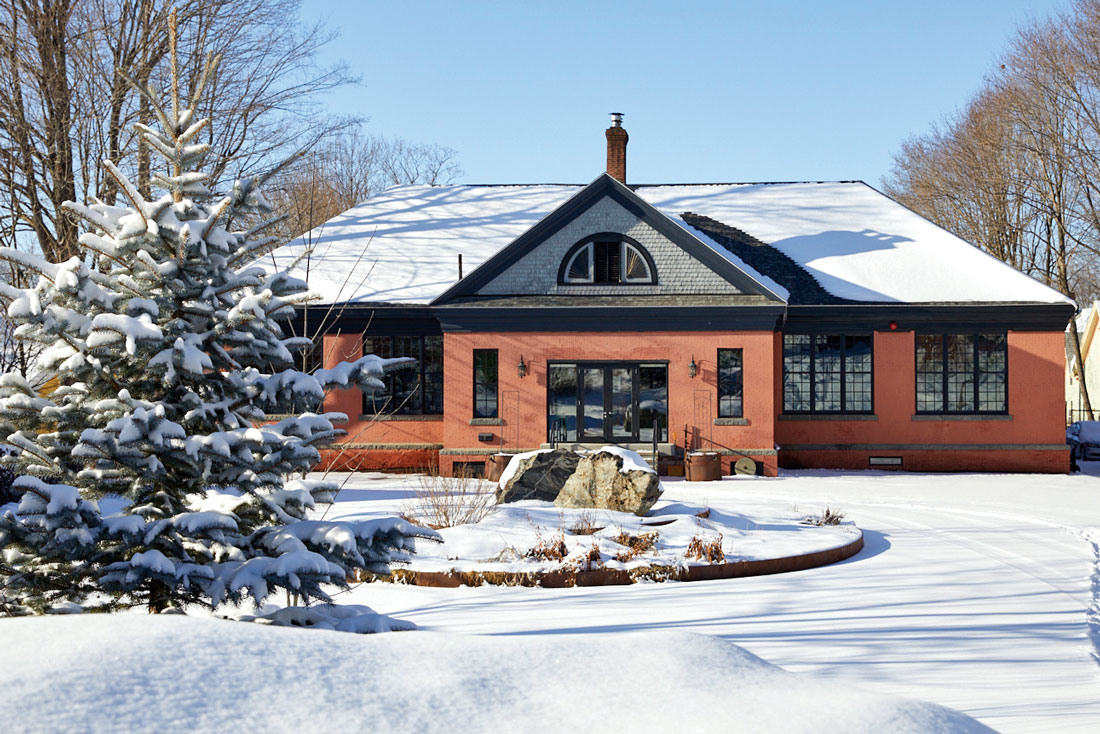 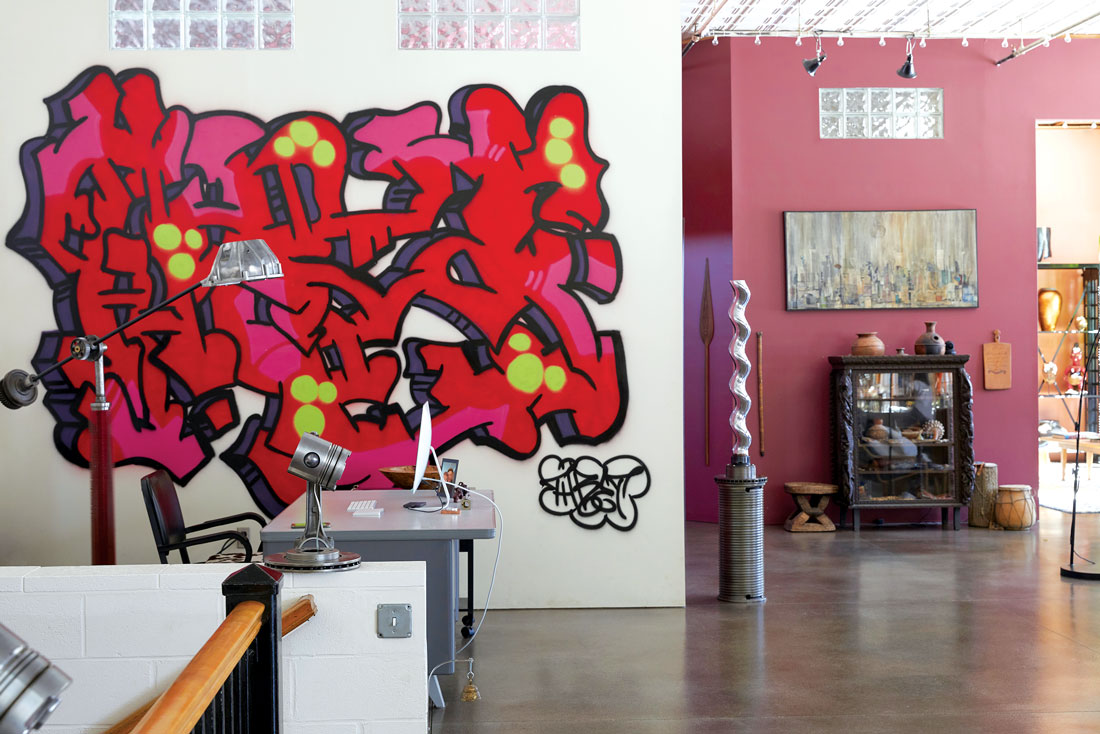 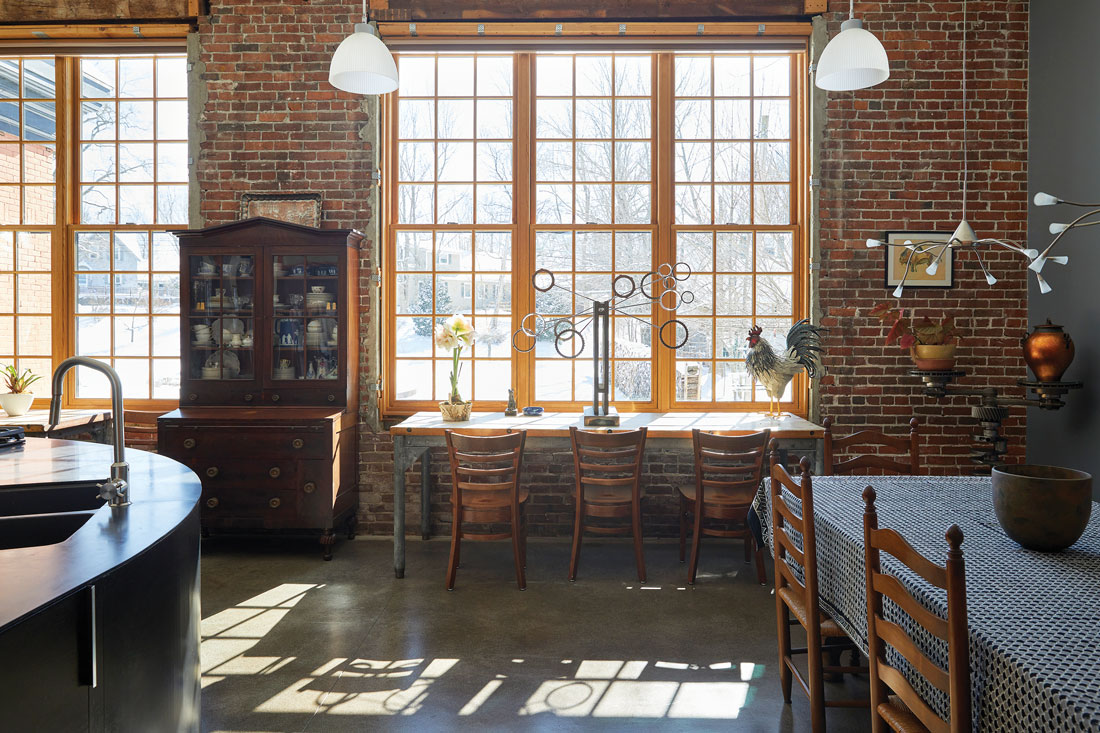 ABOVE 1)  The couple relaxes in the living area with rescue pups, Filly and Pipa, amidst Lash’s mixed-metal, steel- gear, and wooden works. 2) An artful circular garden transformed a onetime parking lot. 3) Eye-popping graffiti by Gardiner’s Matt Demers commands Lash’s office. 4) In the kitchen, a row of chairs paired with an industrial work table from a local bakery conjure school desks. Lash crafted the sculpture from scrap metal and engine parts.

With her health restored, Rees set to work splashing new interior walls with magenta, clay, slate-gray, and goldenrod shades, and designing a new central kitchen. Its focal point is a massive serpentine island Lash crafted, along with a curved pantry and an L-shaped bar — with a Douglas-fir diving board from Rees’s dad’s camp-counselor days for a countertop — from plywood. Lash’s prodigious sculptures and gilded ceramics, showcased on painted wooden pedestals and cast-iron living-room shelves (the latter snapped up during the 2016 Bangor Public Library renovation) give the space a gallery atmosphere, while new glass-block transoms, a slate island top made from the school’s original blackboards, and vibrant graffiti on the office wall by Gardiner’s Matt Demers pay homage to the building’s history.

Shortly before this issue went to press, the couple came to grips with one more lesson: life is short. Yearning for more time with their grandchildren in Vermont, they made the heart-wrenching decision to retire and relocate. “Selling this place is like when somebody buys one of my sculptures that I really love,” Lash says. “I’m happy knowing now they’ll be able to love it too, but we poured so much time, money, and love into this place — it’s bittersweet.”

The Perks of Being a Wall Painter