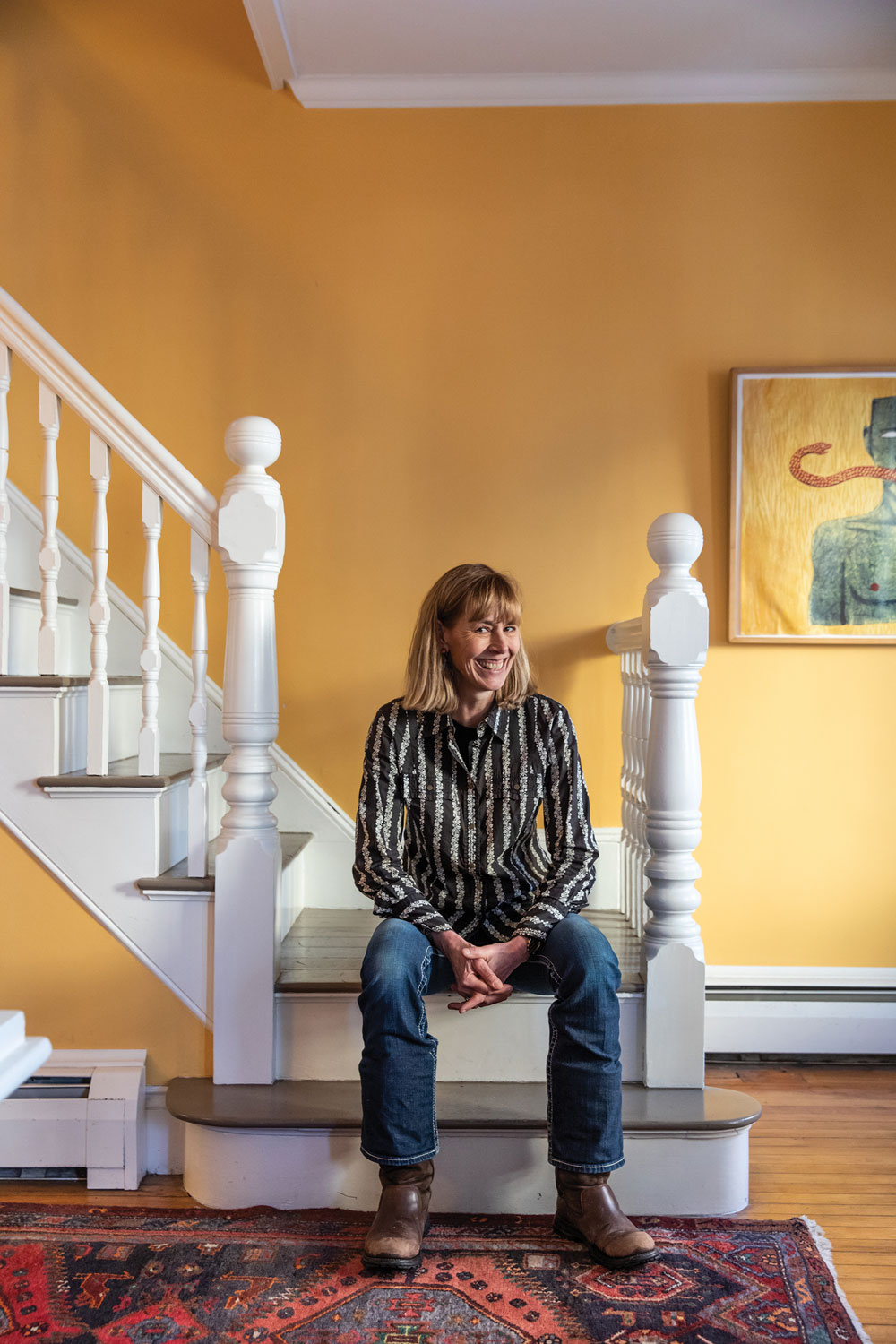 From Rags to Riches

Twenty-three years ago, a writer’s decision to buy on Portland’s Munjoy Hill was considered questionable; now she’s lauded as a real estate genius.

When I was relocating to Portland for a job at the Portland Press Herald, I asked another reporter where I should look for an apartment. He told me the only neighborhood to avoid was Munjoy Hill. It was rough, he explained, as in slum-rough. Slum meant not only crime to me, from my time in Chicago and other big cities, but sidewalks smothered with trash, empty buildings with gaping, darkened windows, and a pervasive sense of utter hopelessness. My husband, Scott, and I didn’t even bother to check out the sprawl of houses atop the peninsula’s crest. Instead, we rented an apartment with a marble fireplace and sky-high ceilings in a West End brownstone.

Then one Sunday, not long after we moved, we set off to walk the spine of Congress Street, from the West End to the Eastern Prom. In relatively short order, we emerged from the shadows of downtown, crossed windswept Franklin Street, and entered the no-man’s-land of Munjoy Hill. As we climbed Congress through sloppy spring snow, we passed 19th-century clapboard houses cheek by jowl. Some were threadbare, to put it kindly, but none were empty and most had plenty of charm. The sidewalks were tidy. We didn’t hear one police siren. This was unlike any “slum” I’d seen before. In fact, by the time we tromped past the proud spike of the Portland Observatory, I realized it wasn’t a slum at all. It was just a mostly middle class, city neighborhood of historic houses that maybe had seen better days.

As the dense buildings gave way to the Eastern Prom, we found ourselves on the very edge of the continent. We stood atop the grassy slope in a rising wind and scanned the cheering expanse of Casco Bay. “Why didn’t we move up here?” Scott asked.

"People from Deering Center might drive over to play fetch with their Labradors in the park, but tourists were unheard of. To live on the Hill then was like being privy to a well-kept secret, and who doesn’t like that feeling?"

This was the mid-90s, long before Munjoy Hill became hip, before there were even hipsters, before the arrival of restaurants, breweries, food trucks, and all the other trappings that have made it a real estate juggernaut with $1 million condos. Now there is a bakery that mostly sells croissants. Back then, you’d have to settle for a tasty blueberry muffin the size of your fist at Colucci’s corner store. You could also buy a single-family house for about $100,000.

So, in 1996, that’s what we did. Like many houses on the Hill, our 1898 working-man’s Victorian was, and still is, rather frumpy looking on the outside, with its mint-green aluminum siding smattered with rust stains. But we bought it for what we found inside: maple floors, French doors, and bay windows. The previous owner had painted all the molding a dark olive green, let her nine cats use the staircase carpet as a litter box, and gone berserk with barn board in the kitchen, but the house had great bones, as they say, plus a “water view.” Looking out the master bedroom window, through the building across the street, you can see a wee bit of the bay.

But people had yet to forgive or forget Munjoy Hill’s Wild West days, when drug dealers sold their wares from Congress Street stoops, the East End Beach drew more addicts and prostitutes than sunbathers, and the putrid waft from the city’s sewage treatment plant made the whole neighborhood smell like an outhouse. Those times were mostly in the rearview when we arrived, but there were reminders. Late at night, we often awoke to the menacing roar of cars drag racing on the Prom. There were still parts of the park you were wise to avoid, and, sometimes, when the wind shifted, the stench from the treatment plant could ruin your meal. Yankee thrift had gotten the best of several houses, some of which hadn’t seen a coat of paint in decades and occasionally shed clapboards, a look we dubbed “shaggy chic.”

The upside was that we felt like we had this urban wonderland to ourselves. People from Deering Center might drive over to play fetch with their Labradors in the park, but tourists were unheard of. I mostly came across my neighbors and the occasional drunk. To live on the Hill then was like being privy to a well-kept secret, and who doesn’t like that feeling?

Even so, we fretted that we hadn’t made the savviest real estate move. Despite our agent’s warning, we’d maybe paid a little too much for our house. We sunk more money into purging the kitchen of its barn-board aesthetic and ridding a bathroom of its faux-Italianate touches — at which point our investment was more than the home was worth.

“We’ll be stuck here forever,” I replied, and we clinked our wine glasses. It may have been a money pit, but it was our money pit.

Then, in 2004, Scott’s job took us to Boston. By then, we could have made a small profit on our house. But we knew we’d never be able to afford another charming/goofy old place in a stunning location in Beantown. And maybe we would come back to Maine one day. Mostly though, we loved our house irrationally. So we’ve held on by renting it for the majority of the year and reclaiming it each summer. This arrangement just barely covers the mortgage, but none of the expenses, such as painting miles of exterior trim. Still, we figure this is money better spent than on a shrink, which we would both need if we said goodbye to Munjoy Hill.

And actually, our somewhat desperate ploy has worked quite well. The house, despite the parade of renters, has remained largely unchanged, except for a few chips in my porcelain farmer’s sink and some water rings on a Chinese bench. Munjoy Hill, though, is a different matter.

It’s hard to say when the rest of the world “discovered” the Hill. Was it when the duck boats began lumbering up Fore Street with their jolly army of quacking tourists? I whiffed change in the air when a driver exclaimed over his headset, “There’s a local walking her dogs!” and all the quacking turned in my direction. Then I noticed a growing crowd of 20-somethings eating pancakes at the Front Room in what looked like their pajamas, whom I now realize were the shock troops of the bearded millennials to come. Prices began to go up. Houses began to be knocked down. From their rubble arose shiny, blockish condo buildings. Last summer, as I drank an iced coffee outside Hilltop Coffee, I struck up a conversation with a well-dressed man who was thinking of moving to Munjoy Hill from Sao Paulo, Brazil. I fought the urge to tell him the neighborhood was actually a slum. Not that anyone would ever believe that now.

The Realtors have discovered our dowdy green house. They send us cards, even handwritten letters, pleading with us to let them sell it, listing the bazillions that nearby properties have gone for. Friends, family members, and people we’ve just met point out what a brilliant investment we made. We, thanks to our illogical love of a house, have become real estate geniuses.

Real estate geniuses would sell a property they maybe shouldn’t have bought in the first place, that against all odds has soared in value. You don’t have to be all that savvy to realize that when your house is worth four times what you paid for it, it’s time to cash in. Our neighbor did just that. Then, for months, we saw him drive slowly past his old place with the view of the bay, looking longingly at it. So we’ll unwisely keep our quirky Hill house for the same reason we unwisely bought it. Because we love it. That is one thing that hasn’t changed.

Amy Sutherland is the author of four books, including What Shamu Taught Me About Life, Love, and Marriage, based on a popular column she wrote for the New York Times, and, most recently, Rescuing Penny Jane. She writes the Bibliophiles column in the Boston Globe and has contributed to Smithsonian, Preservation, and other outlets.