A Perry couple is putting antique houses back together — starting with their own. 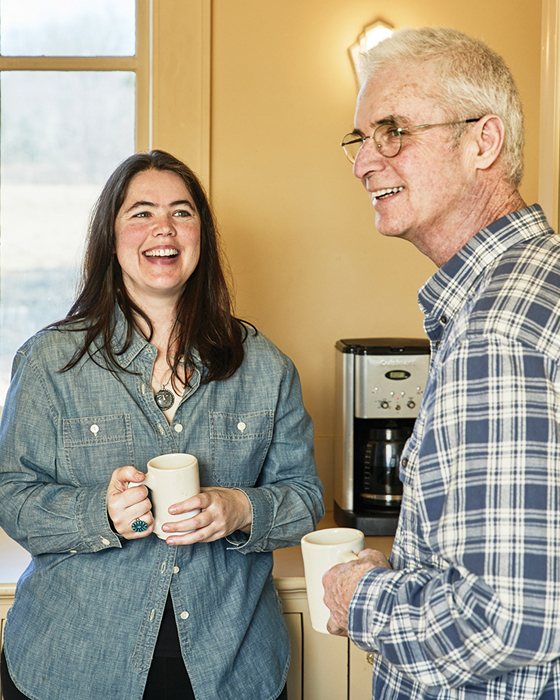 While many people are tearing down walls in their antique homes in pursuit of trendy open floor plans, Joyce Jackson and Patrick Mealey are putting them back up. The husband–wife team specializes in historically sensitive restorations right down to the smallest detail, like a slender baseboard trim.
“What was put there in the first place is always just right,” Jackson believes. “I mean, look at our house — it’s so simple.”
Sitting above Boyden Lake in Perry, their 1890s hipped-roof farmhouse was the first of many restorations they’ve undertaken Down East since moving from Sag Harbor, in the Hamptons, in 2001. It took several years because paid work always came first.

Meticulous researchers and resourceful scavengers, Jackson and Mealey were comfortable with the pace. Had they rushed the project, they wouldn’t have their 1920s double-drainboard sink, found through a want ad they placed in the community shopper — for more than two years. (It was a steal at $100.) If they hadn’t taken their time, they wouldn’t have a front door that’s a dead ringer for the long-gone original. They know it’s a match because the builders’ descendants happened upon their project blog and shared photos and recollections.

Fond memories of their Maine honeymoon prompted the couple to look for a home near Eastport. “It’s a little like Sag Harbor — a water town with houses of the same era as the houses we’d been working on,” Jackson says.

But their first day of house shopping ended in frustration. Nothing came close to meeting their needs, which included spaces for their restoration business, called fineartistmade, and studios (Jackson is a photographer and Mealey a painter). Discouraged, they drove to Perry the next morning to see the last house on their list. “It was woods, woods, woods, woods,” Jackson recalls, “then all of a sudden a brook, an orchard, a meadow, and this house. It was like a mirage.”

The house was in relatively good shape, although the walls separating the kitchen, living room, and dining room were gone. “We wanted to put it all back and preserve any surviving materials,” Mealey says. To do it, they looked for ghosts of what once was: An impression in the paint hinted at beadboard. Notches in floorboards suggested backband molding. In the dining room, they pulled up wide pine boards to expose the original floor, then made a tabletop with the discarded wood.

The couple painted the floor to jazz up the simple dining room. “It kind of pops the table,” Jackson says. On the table, an intricately carved tramp box belonged to Mealey’s grandmother. The clawfoot tub dates to when the house was plumbed in the 1930s. Jackson and Mealey found old housewares in the barn that now line the pantry shelves. “Patrick and I share a simple, almost austere aesthetic,” Jackson says.

Where clues were few, they did as they pleased, like handcrafting kitchen cabinets in the 1930s ell. They installed mid-century appliances — that farmhouse sink, for one, and a 1949 Florence gas range that they spotted behind a garage in Lubec (another steal at $20).

“Everything we have has a story,” Jackson says, “and we enjoy putting it all back together again.”

Nominate your home for a feature!

The Lowdown on Colossal Doors