Been There, Reno'd That

Owners and pros share tips, tricks, and hard-won wisdom for anyone launching into a Maine camp building or rehab project.

It’s the place you go to get away from it all. Or at least, that’s what you imagine it will be someday. Whether you’re diving into the renovation of a longtime family camp, shopping for a sweet old place to make your own, or investing in land on which to build your dream retreat, you’ve got a lot to do: from choosing the right site and mastering building regulations to maximizing living spaces and guarding against blackfly season. To save you some of those inevitable “if we’d only known!” moments, we asked local homeowners and building pros who have been through the process to share their best insights and advice. Lucky for all of us, they were happy to talk. 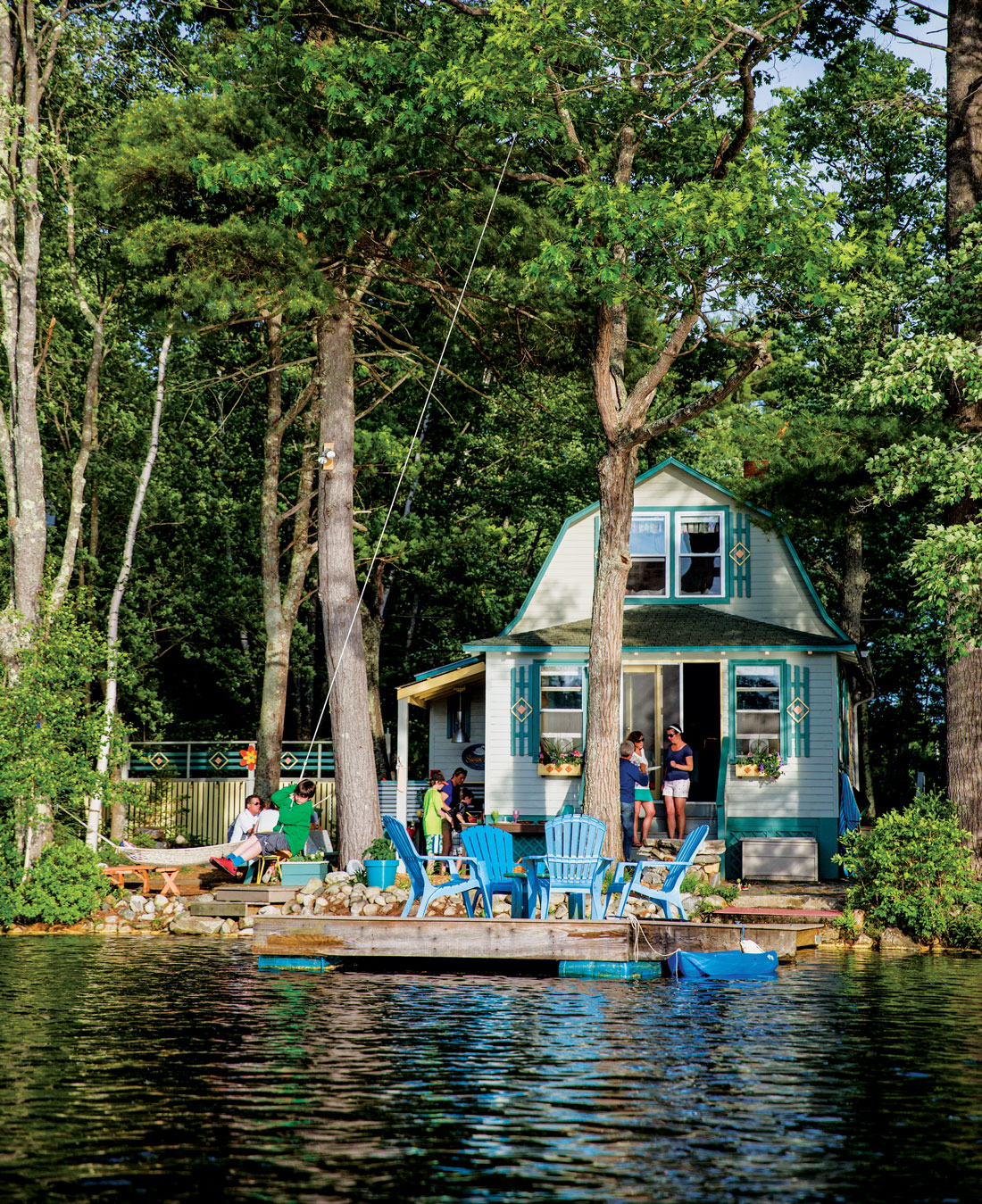 Most lakes in Maine are north-south lakes. If you look at the old camps, they are at the north end of the lake, looking south. They get great sun all day, prevailing breezes to keep them cool and keep bugs away, and their end of the lake or pond has deeper water. New property at the southern end doesn’t have those advantages, and can be harder to work with. — Rob Whitten, principal, Whitten Architects, Portland

Our camp was built in the 1940s and sits six feet from the water’s edge — which we wanted, so a new build was not an option. With new construction, there are rules regarding how near buildings can be to the water. If you want to be close, find an existing building and renovate. — Bobbi and Bill Bailey, camp owners, Oakland

We decided not to survey our property’s boundaries. It was a cash sale and apparently surveying is an uncommon practice (or so we’re told). When a builder purchased an adjacent piece of land behind our property, we learned that our camp bedrooms — built over 30 years ago — were not actually on property we owned. In addition, the builder had a legal right-of-way to the water that ran through our driveway. After an 18-month process that included surveys, legal counsel, and more than a little mean-spirited, back-and-forth legal wrangling, we bought him out for significantly more than he paid for his land. — Meredith Jones and Dana Murch, camp owners, Sidney 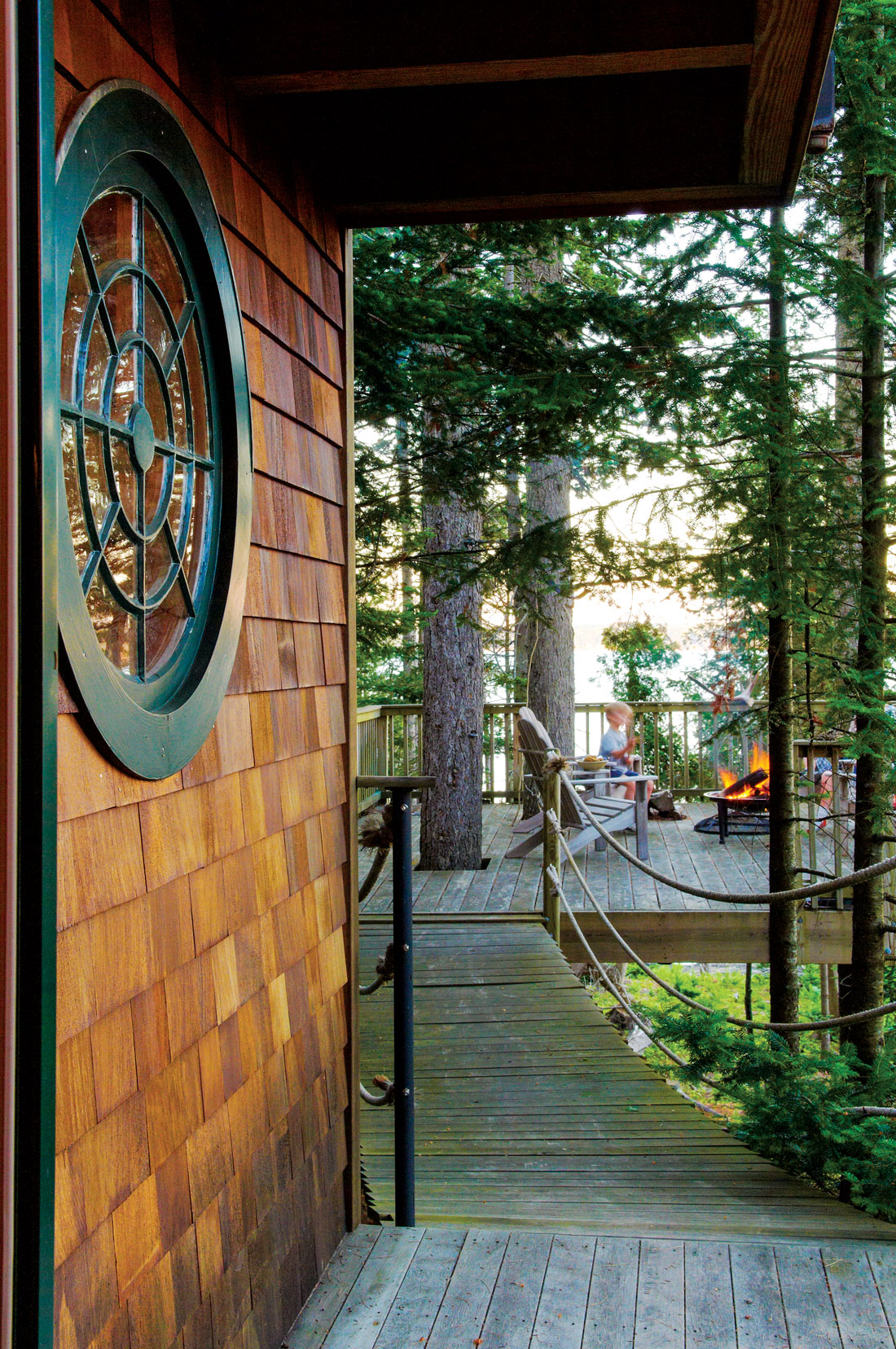 </p> <p class='p1' style='text-align: center;'><span class='s1'><b>TIP</b></span></p> <p class='p2' style='text-align: center;'>See if your code enforcement officer can come visit before you buy. He’ll tell you what he’s looking for, so you’ll know what you might be facing. And in the future, if you add things, you’ve already made a friend. <i>— Rob Whitten, principal, <a href='https://www.whittenarchitects.com/' target='_blank' rel='noopener noreferrer'>Whitten Architects</a>, Portland </i></p> <p>

</p> <p class='p1' style='text-align: center;'><span class='s1'><b>TIP</b></span></p> <p class='p2' style='text-align: center;'>See if your code enforcement officer can come visit before you buy. He’ll tell you what he’s looking for, so you’ll know what you might be facing. And in the future, if you add things, you’ve already made a friend. <i>— Rob Whitten, principal, <a href='https://www.whittenarchitects.com/' target='_blank' rel='noopener noreferrer'>Whitten Architects</a>, Portland </i></p> <p>

Strategize in the Off-Season

Use the months of December through March to plan your project and line up contractors so you’re ready to pull the trigger when the ground thaws. We were told by one contractor that many people wait until nice weather arrives to contact him. By that time, he’s often too busy to take on new work. — Spencer Gober and Thomas McGinnis, camp owners, Norway

Before You Change Anything, Document Everything

Take detailed pictures of the existing property — inside, outside, measure the distance from the property lines and water frontage. We had an issue when we removed our front deck; the town assessor would not allow us to rebuild it. Luckily, we had taken a picture. Once we proved we had the deck prior, we were allowed to rebuild it in the original footprint. — The Baileys

We’ve made many upgrades over the years, but each time we run into new rules. With any electrical or plumbing work, we have to review the whole system to ensure everything is current and done to code. This isn’t a bad thing, but it can add to the cost of a renovation when you find issues — for example, when all of the exterior lighting is no longer wired correctly, and must be updated, and your project didn’t even involve exterior lighting! — Pam and Don Russell, camp owners, Freeport

I did not want a pump station for septic at our camp because we lose power up there quite a bit. I wanted a gravity system, so I had to take into account the location of a well and leach field. Similarly, I didn’t want a boiler with hot water for heating, which can be problematic in winter if the pipes freeze. We could have installed a furnace, but we like the ambiance of a fireplace so we chose a direct-vent gas fireplace, instead — you can set the temperature and leave it. — Travis Kinney, residential designer, Scarborough, and camp owner, Rangeley 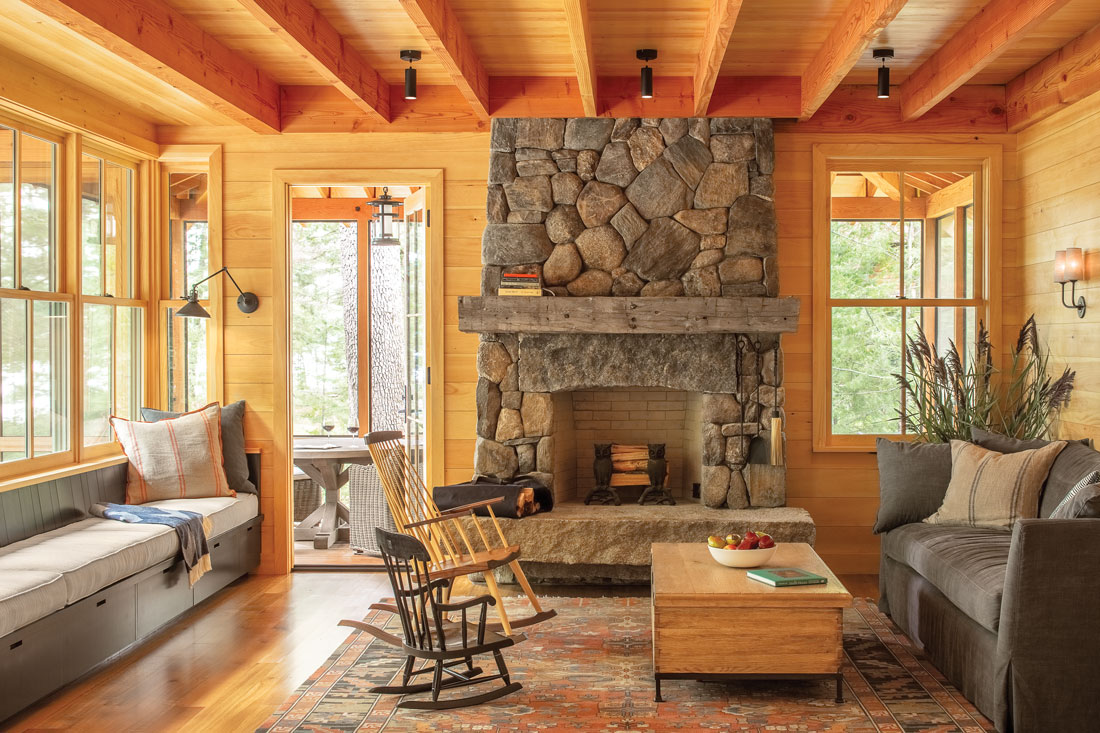 Use local materials and local craftsmen, who will respect the integrity of what “camp” means. Use fieldstone that comes from within a mile or two for fireplaces and landscape walls, maybe old split granite for the front steps. Oak, pine, and white cedar are the preferred local woods for boards and beams. Cedar shingles on the exterior wear well and have a rustic charm. We avoid “residential” materials, like Sheetrock, carpeting, and vinyl or composite siding. — Whitten

Install the Right Roof for Snow

Our cabin originally had asphalt roofing, which didn’t easily shed snow unless we shoveled, which is dangerous. When the snow finally did fall from sheer weight, it would wedge up against the log siding, where it would sit for months, eventually rotting the wood. We ended up installing a metal roof that is more durable and lets snow slide off and away from the house. — Laura and Adam Casey, former camp owners, Starks

DIY What You Can

My brother-in-law, who is building a camp, purchased local white-pine shiplap siding that he is priming and painting himself. His contractor was going to hang raw siding and paint it after, which is okay, but wouldn’t last as long — moisture would likely get into the wood and cause it to degrade faster. By doing it himself at home, he’s protecting the siding and saving about $6,000 in labor costs. — Kinney

When we moved in, our cabin’s doors, windows, and support structures all lacked insulation and there were places where we could see light coming in. We found that backer rod [thin, cylindrical foam] with a caulk finish was a cheap and effective insulator until we were able to renovate. Before we placed it in gaps and around leaks, our heating bill was as much as $250 higher a month than it was after. — The Caseys 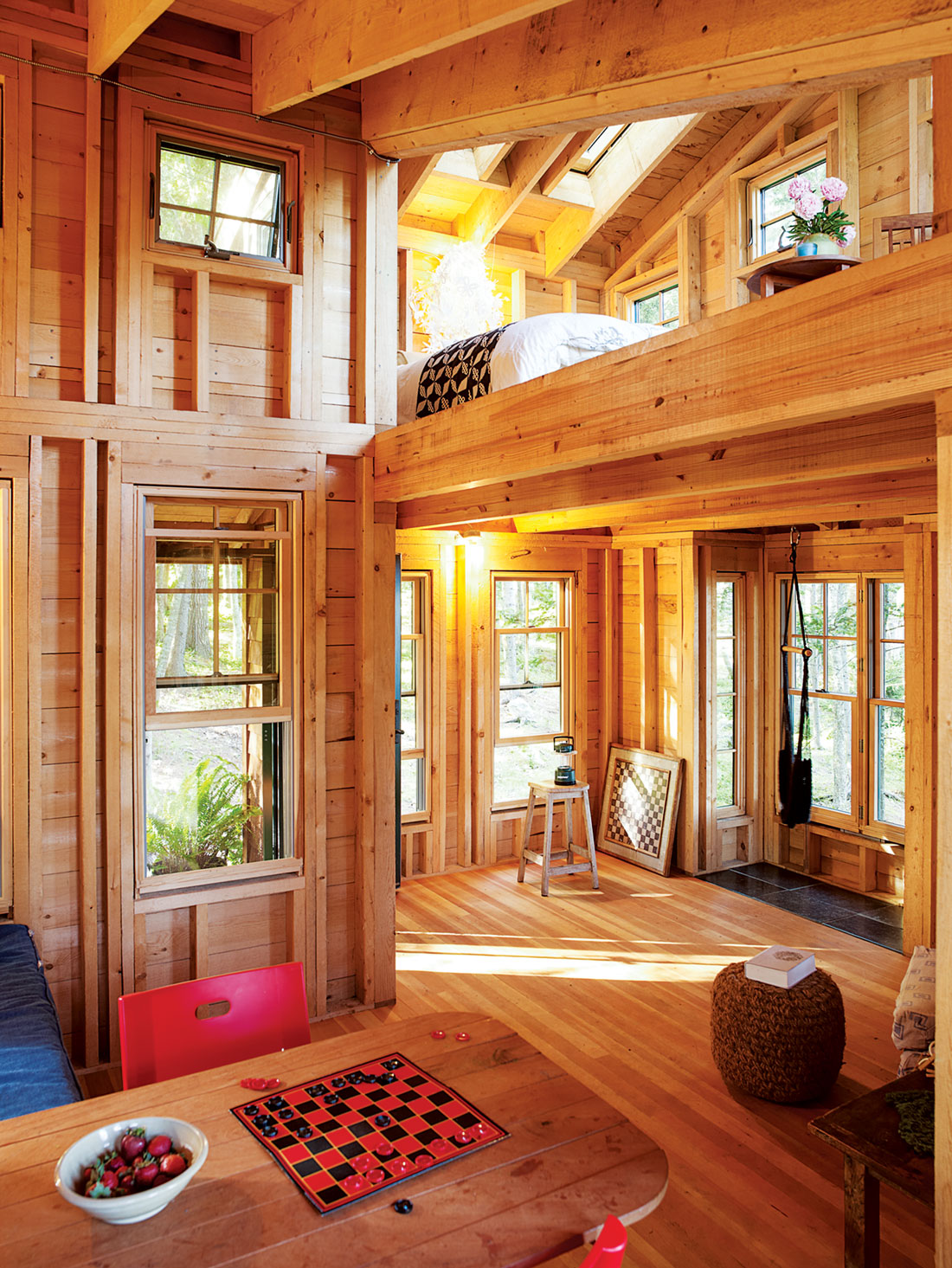 Use Every Nook and Cranny

Once, we built a guest cabin on a lake and planned to complete a main house a year or two later. But the owners ended up so happy they abandoned the main house plan. The cabin is very small, but they can accommodate more people than they imagined because we squeezed in lots of interesting little bedrooms with trundle beds and berth-like bunks in niches under the eaves and adjacent to the staircase landing. When you don’t have a great need for closets, dressers, and giant beds, you can create really fun, quirky spaces. — John Priestley, principal, Priestley + Associates Architecture, Rockport

The cabin we’re building has no crawlspace and no basement foundation. Everyone tried to talk me into a basement for storage. I don’t want storage! I have all that junk at home. And I probably saved between $10,000 and $15,000 by not going with a full basement. Instead, we built the first floor on top of a slab-on-grade foundation. — Kinney

Our camp is not a big entertaining space. We don’t have an oven, and
don’t need it. We cook on our four-burner gas stove and on the grill
outside. We have portable burners too, if we want to have a lobster bake. — Kate and Bill Corrigall, camp owners, New Gloucester

Invest in a Porch

I’m a great believer in covered and screened porches on camps. Maine is tough for decks — it’s too cold, buggy, and windy. But you can spend a day on a porch. Sure, a deck is half the cost, but a porch offers more than twice the opportunity to spend time there. — Whitten

And Position It Strategically

Think about creating a natural flow from the kitchen and main living area to your outdoor living spaces. Doors can interrupt seating space, so they must be positioned to respect both indoor and outdoor seating arrangements. Many a porch has been spoiled by a set of French doors right where you’d like furniture! — Priestley

Our goal is to be as historically sensitive as possible as we renovate our 1876 camp. With that in mind, we’re converting a rear room off the kitchen, previously used for firewood storage, into a bathroom. This will enable us to add a modern convenience without altering the exterior or reconfiguring the existing layout. — Gober and McGinnis

Think Before You Insulate

Winterizing a 100-year-old camp could be turning it into something it was never intended to be. Consider putting a small, four-season camp next to the original structure instead. By and large, guests come in July and August so you’ll still get plenty of use out of the main camp. But you’ll also gain a winter retreat without disturbing the character of the old place. — Whitten 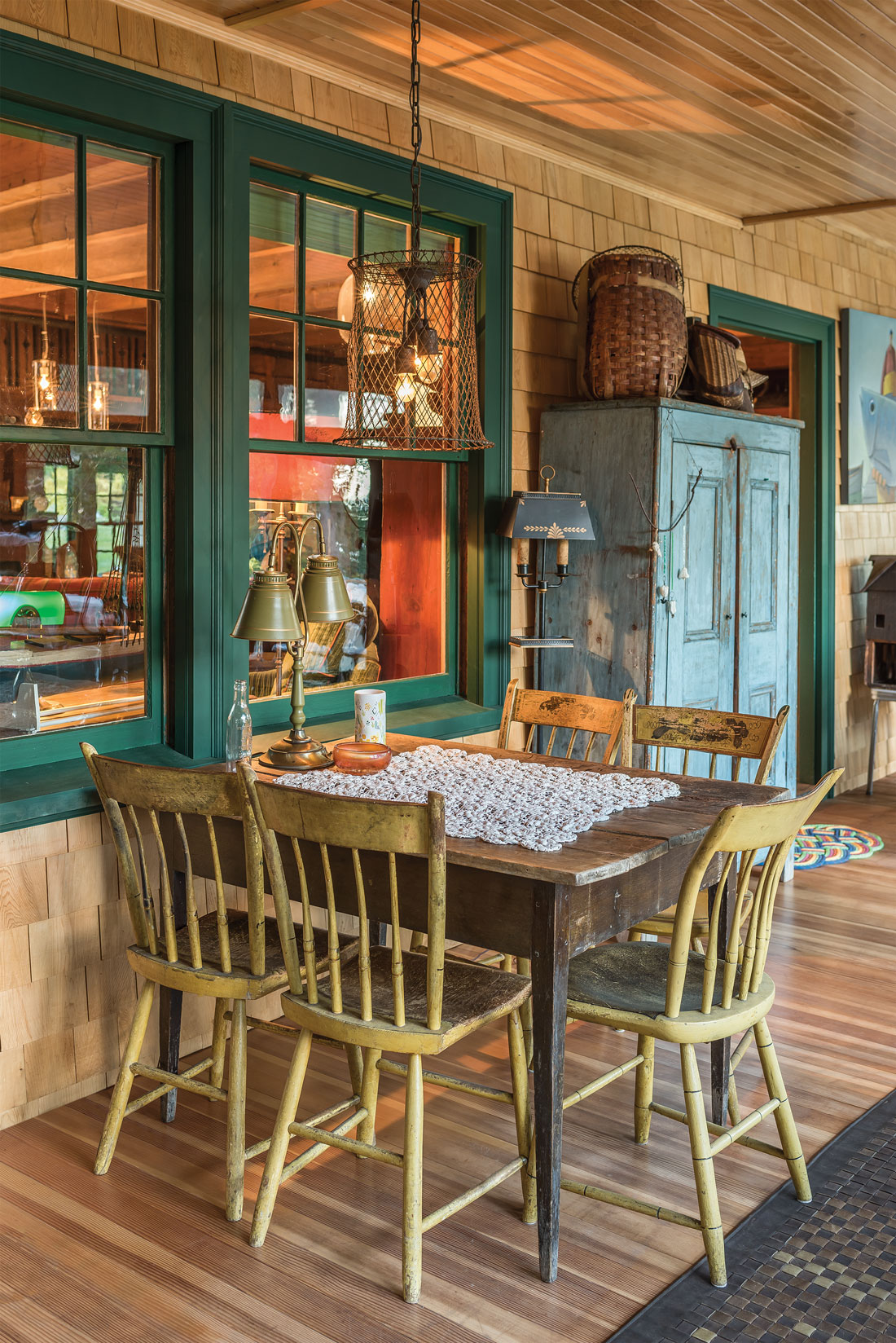