7 Backyard Studios and Hangout Spaces to Inspire Your Own Escape

In a brave new working and recreating from home era, Mainers are building inventive studios, offices, and hangout spaces in their own backyards.

Portlanders Jesse Thompson and Betsy Scheintaub know they were lucky to have a backyard studio in progress when the pandemic and subsequent lockdowns hit last spring. “All my friends are jealous,” Scheintaub says. “Everyone I know really desires a space that’s just a little bit separate, but at home.”

In this, the pandemic seems to have accelerated a trend that was already picking up steam. Thompson and his family started turning their pool house into a work and hangout space in 2018, the same year Portland modular firm BrightBuilt (an affiliate of Thompson’s Kaplan Thompson architecture firm) launched its line of “Sidekicks” — compact, self-contained units meant to be installed near a home. This spring, the company began rolling out nearly a dozen new designs, including a treehouse. Another Portland prefab firm, COVE by Knickerbocker Group, has seen inquiries about their accessory buildings double in the last year. “I think last summer was a wake-up call for many people,” lead architect Valery Tessier says. “They want to develop their properties so it becomes their sanctuary, a place where they can safely get together and make memories.”

Dreaming of creating your own sanctuary? Take inspiration from five homeowners reaping big-time benefits from their mini retreats.

PERMITTING LAWS GOVERNING ACCESSORY STRUCTURES VARY BY TOWN. LIVABLE UNITS, KNOWN AS ACCESSORY DWELLING UNITS, OR ADUS, ARE THE MOST TIGHTLY REGULATED AND MAY BE PROHIBITED. CHECK WITH YOUR CODE ENFORCEMENT OFFICER BEFORE STARTING A PROJECT.

Six years after renovating their 1960s Portland ranch, architect Jesse Thompson and garment designer/fiber artist Betsy Scheintaub set their sights on the rotting, squirrel-infested pool house in their yard. Their vision: a studio for Scheintaub and hangout for their 16-year-old daughter and 19-year-old son — “a space for the kids to be home, but not exactly in the living room,” Thompson says.

The family tore down the pool house and Thompson designed a new structure with a dramatically angled roofline — its tallest elevation flooding the studio with light — in the existing footprint. Over two years, carpenters framed and roofed the building and installed its triple-glazed windows, and the Thompson-Scheintaub clan added non-toxic wood-fiber insulation, local eastern-white-pine paneling, and hemlock clapboard siding. (Together, the materials keep the interior temp at 70 degrees in winter, without the heat on.)

When the project wrapped last summer, Thompson, who’d been working from home since COVID hit in the spring, commandeered the living area for his office. “Everyone is happier with me out here,” he jokes, noting that, post-pandemic, he’ll likely continue working there sometimes. “But I’ll be negotiating with Betsy over who gets it first.” 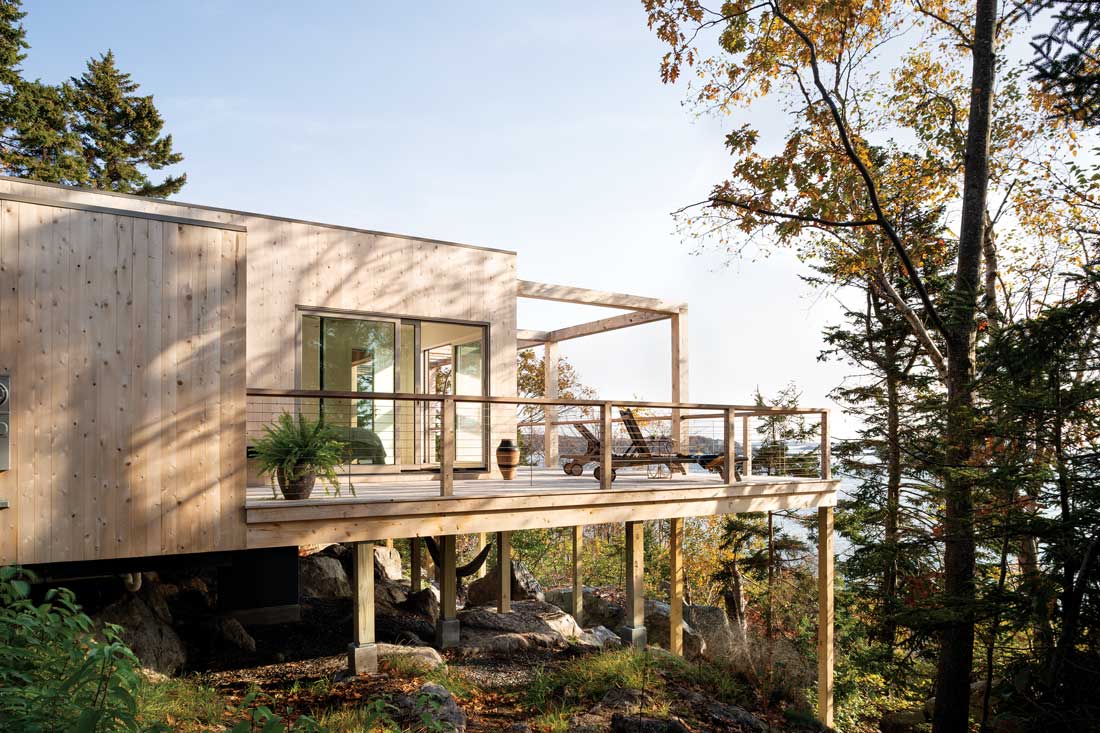 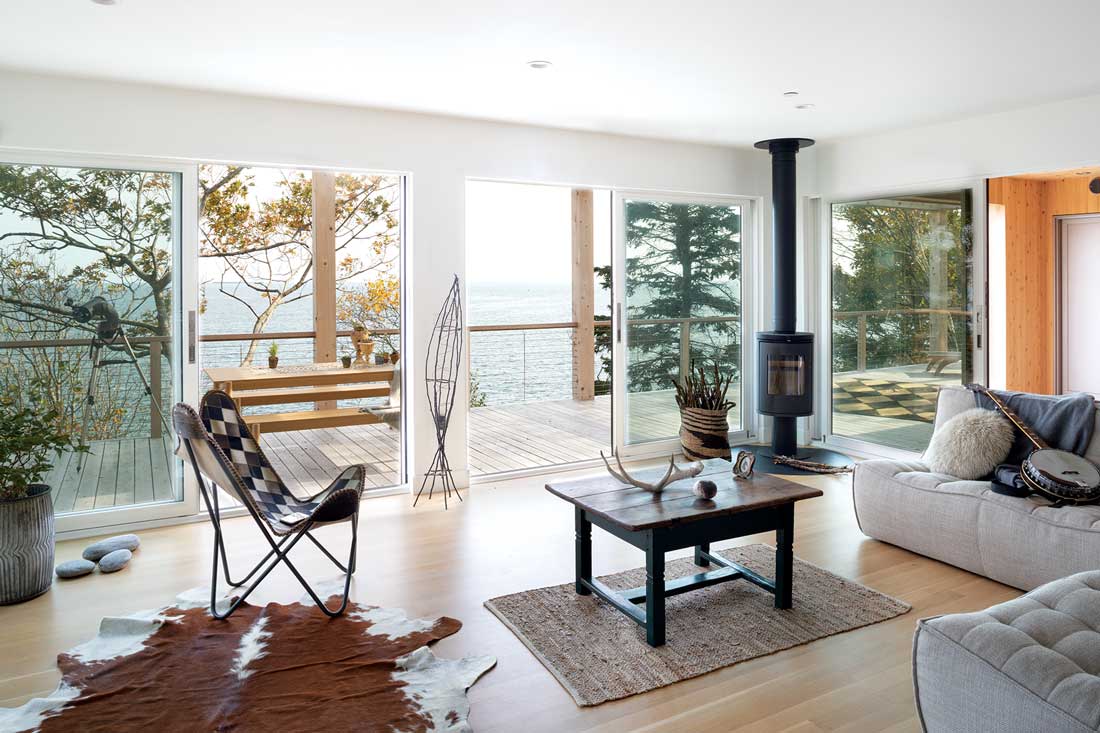 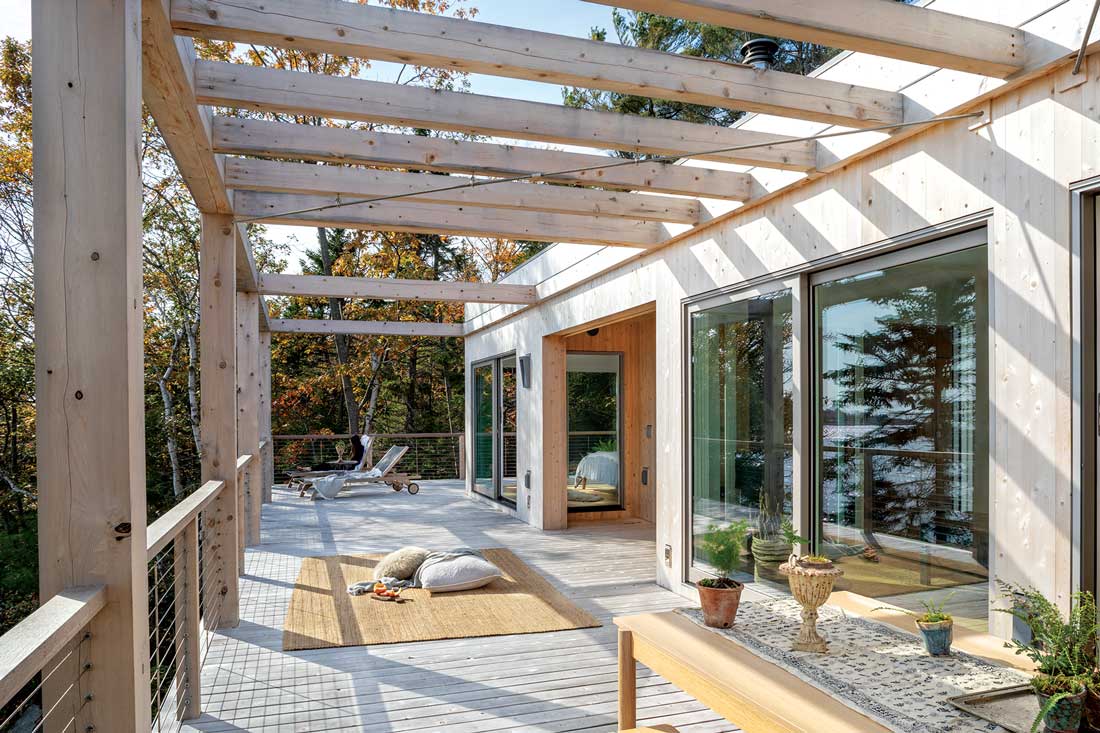 A decade ago, a California couple (who asked not to be named) purchased a 1910 cottage on the northern tip of Peaks Island, where they spend happy, peaceful summers. “We love the back side of the island, which feels much more removed from Portland than it actually is,” the wife says. But with their children now adults and their family expanding, the cottage, with its four bedrooms and single bath, began to feel tight. So they set out to build a guesthouse with a workspace for the husband, an aspiring writer, on a bluff near the main cottage.

The resulting broad, cedar-clad structure clings to the ledge on monolithic concrete footings. A studio/great room and bedroom/half-bath are arranged on either side of a breezeway that gives way to a 1,000-square-foot wraparound deck partially shaded by a pergola. Tucked in the southwest corner is an outdoor shower with a cutout framing Casco Bay.

One With the Land

“It was important that they have the experience of being embedded in the land and environment,” says Peaks Island architectural designer Rachel Conly, who tackled the project with local builder Heather Thompson. In this, they seem to have succeeded. “Wherever you sit, the view is restorative and centering,” the wife says. “There’s a bald eagle that lives in a tree right next to the deck. You really could not get more perfect.” 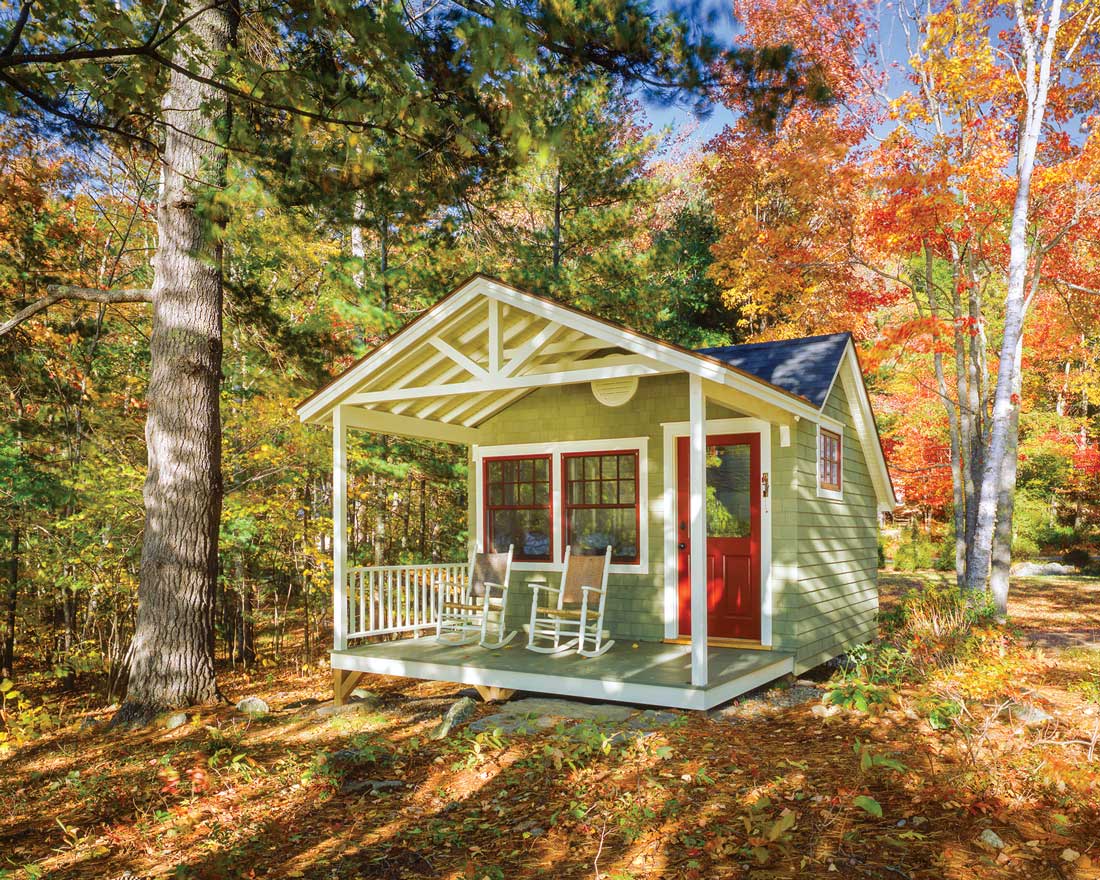 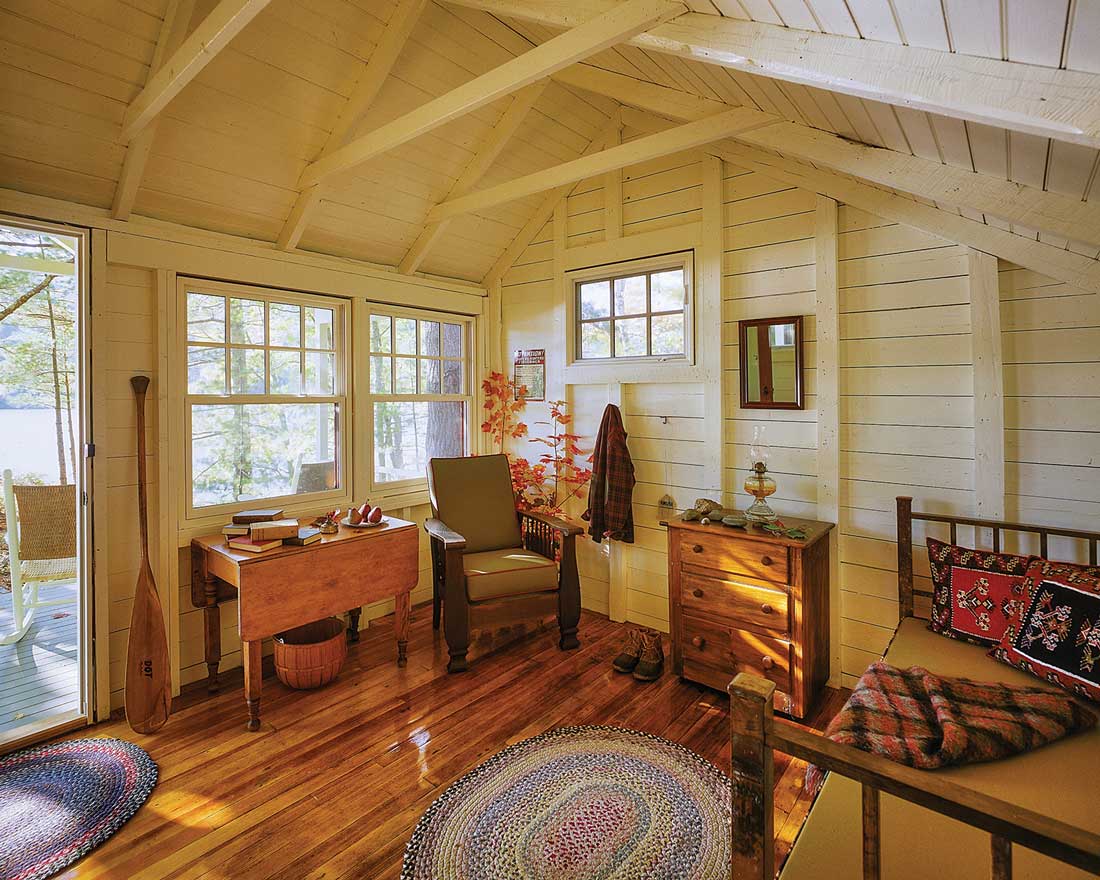 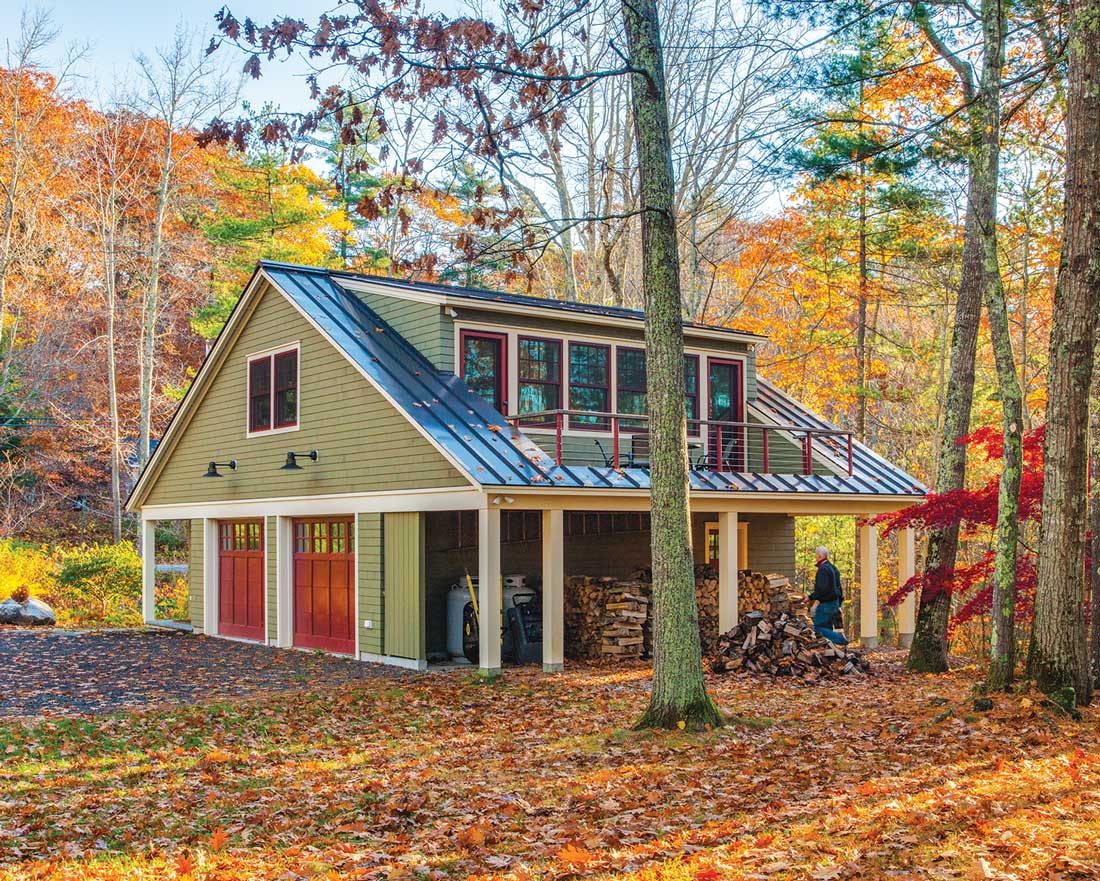 When architects John Scholz and Meg Barclay bought their cottage on Camden’s Hosmer Pond in 1998, it came with a former hot dog stand used as a cabin. It had a sink in one corner, a giant grease stain on the linoleum floor, and had more or less merged with an adjacent pine. “Someone had fixed the roof and put tar paper up the tree so it was like one thing,” Barclay says.

The couple slid the structure back three feet, toward the main cottage; installed a new roof and windows; rehabbed the porch; removed the sink and linoleum; and discovered fir flooring beneath newspaper from the 1940s. (A braided rug hides the persistent grease stain.) Now spray-painted creamy white inside, the place serves as a cozy guest cottage Scholz and Barclay call “the bathhouse” because friends also use it to change before swimming in the pond.

In 2011, the pair bought the lot next door and added a two-car garage with an airy architecture/dance studio (Barclay teaches on the side), kitchenette, and pond-facing deck on top, and a bath off the entry below. Painted pale green with red trim like the other buildings, “it disappears among the evergreens and foliage,” Scholz says. 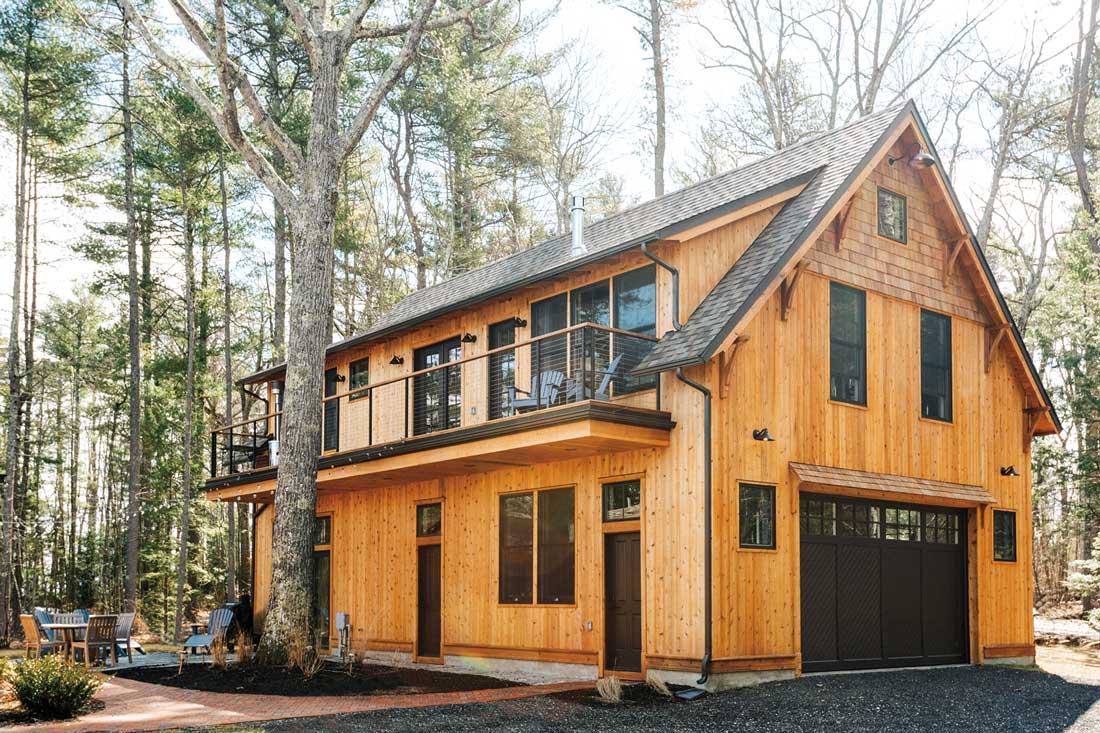 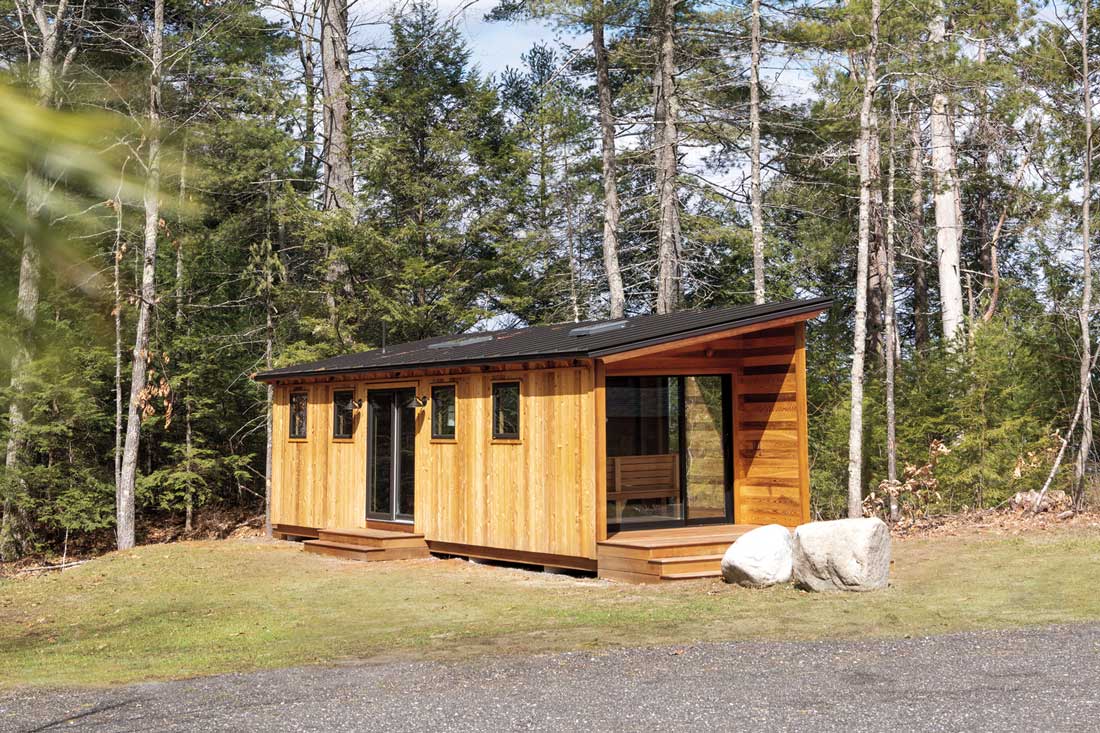 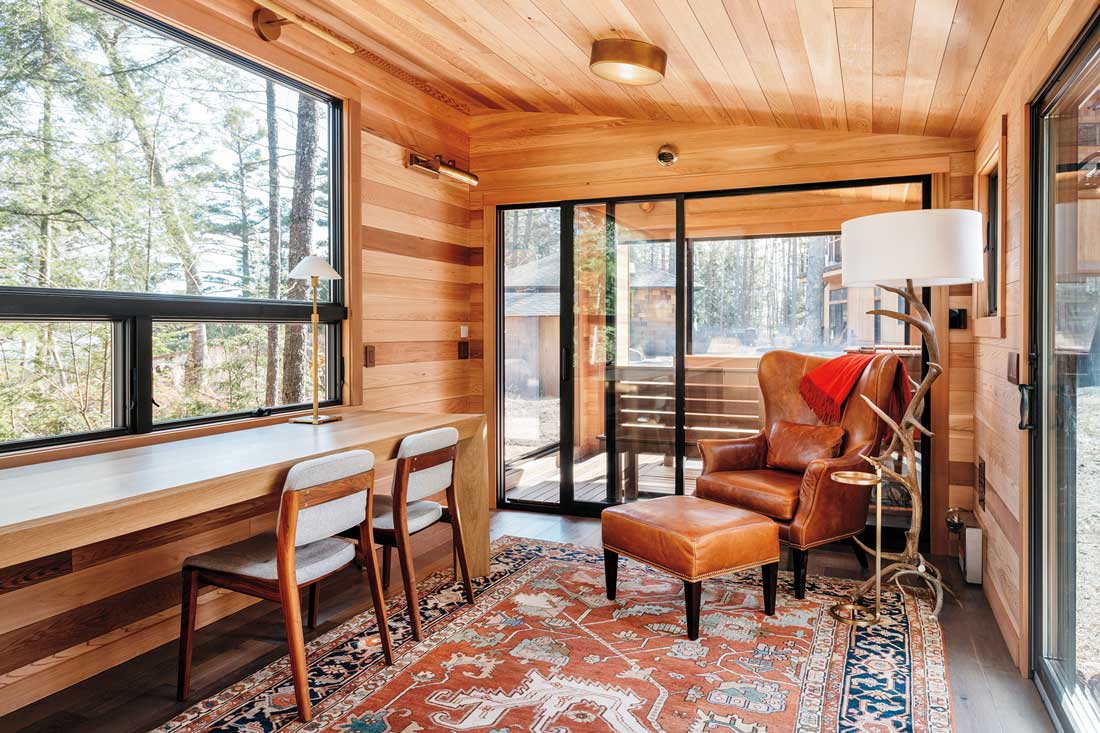 In 2018, Boston-based Matt and Sarah Hamilton asked Yarmouth architect Joe Waltman and Harpswell builder Matt Wogan to create a year-round barn with a garage, guest quarters, an office, and a workout room on their Sebago Lake property, where Wogan had previously remodeled a seasonal cottage. And, boy, were they glad they did. When the pandemic struck last spring, the Hamiltons moved to Sebago full-time and began spending their days on Zoom calls in the soaring, red-cedar-clad structure.

Shortly thereafter, seeking a place to chill — er, loosen up — after work, they asked Waltman and Wogan to build a sauna. Eventually, they realized they could also use another workspace, so the team designed a linear building with a roofline that tilts upward toward the lake. At one end is an electric sauna with glass on three sides; at the other is an office with an 11-by-14-foot, water-facing window and a built-in L-shaped desk in rift-sawn white oak. A powder room is tucked in between, and Wogan clad the “whole shebang” in western red cedar to match the barn.

“You’re sitting inside this cocoon, completely encompassed in a wooded landscape, looking at the lake,” Wogan says. “It’s such a soothing place to be.” 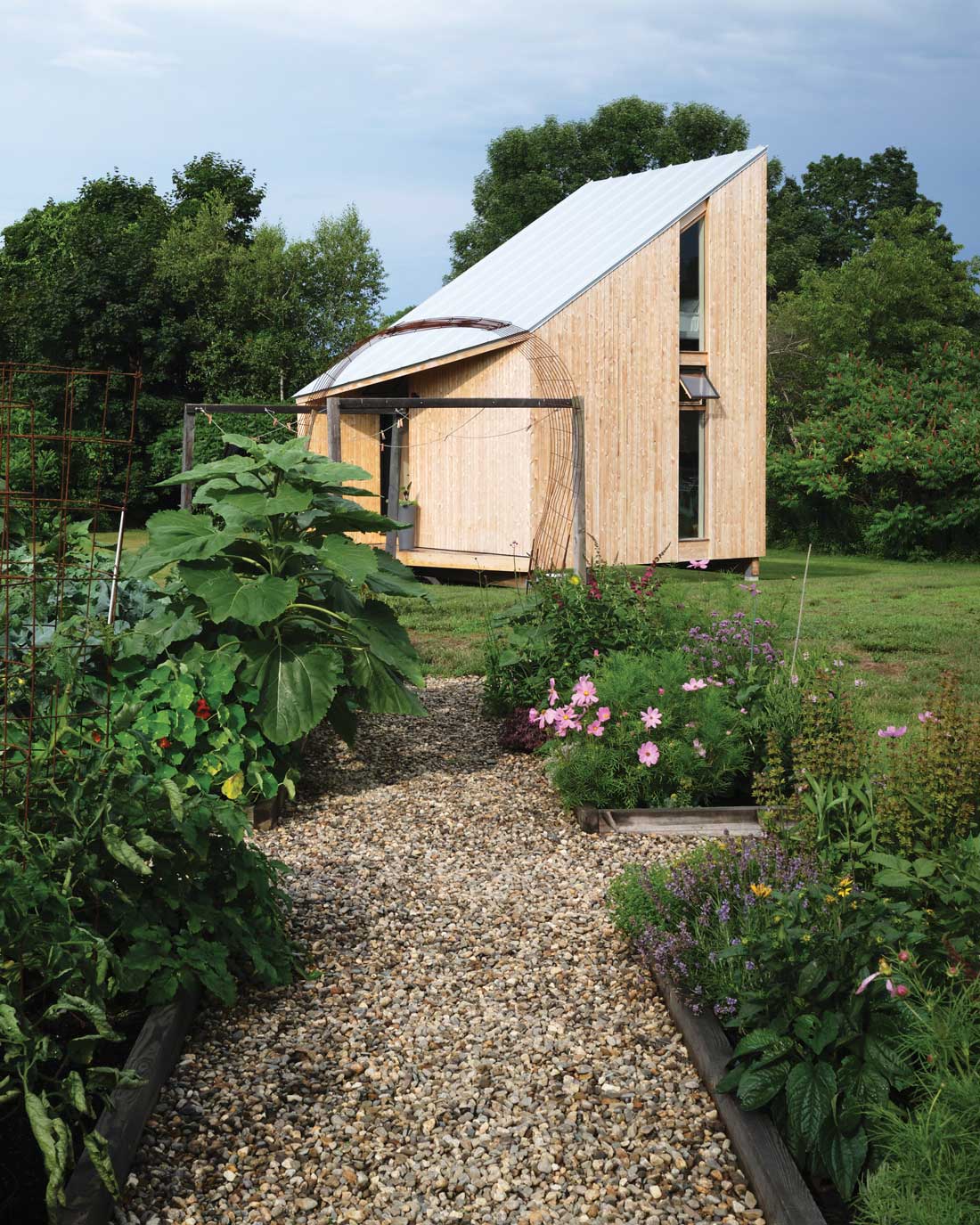 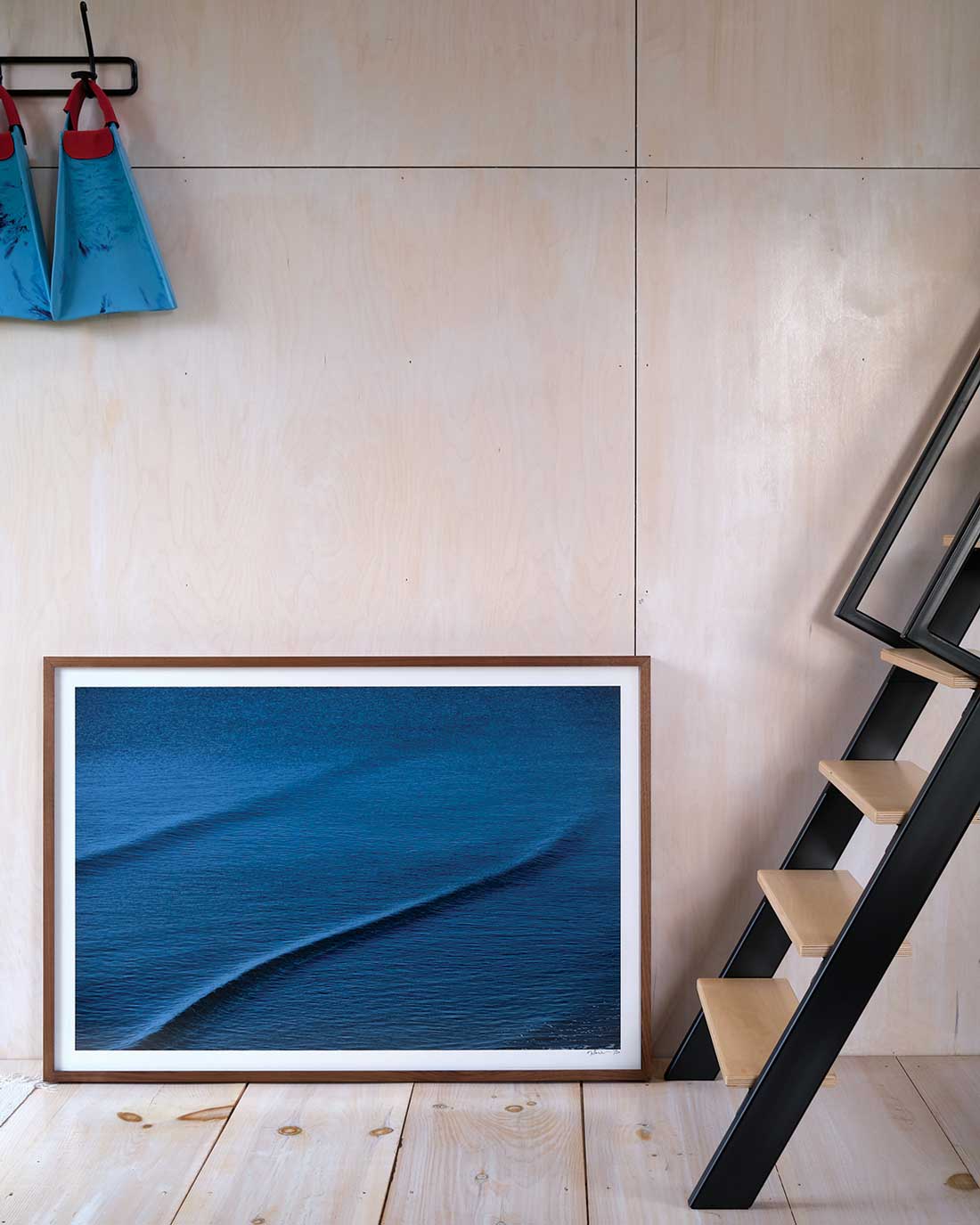 York photographer Nick LaVecchia decided to put a studio/guest room on his property after he and his wife realized that if he built it himself, it would only add $50 to their monthly mortgage, and save some $300 a month on renting studio space. The hitch: they wanted to keep the build under 200 square feet — the limit for what’s considered a “shed” in York — to streamline permitting.

LaVecchia and Portland architect Caleb Johnson, who designed and built the couple’s home, came up with a white-cedar-clad structure with a sharply pitched roof that “looks like an iceberg from some angles,” Johnson says. Beneath the 22-foot-high peak, they tucked in a guest room loft, accessible by ladder. The building is assembled using efficient structural insulated panels (SIPs) that LaVecchia calls “adult Legos.” He and some friends put them together over three days in 2019, and he spent the next few months furnishing the interior with birch-plywood panels, electricity, and a tiny, wall-mounted electric heater. The place is so well insulated, though, he hardly turns it on, even in winter.

LaVecchia says he gets more work done now, and that he fields questions about the building all the time. “Everybody wants a backyard something or other; I think this will just keep getting more popular.”

Why I Live Here