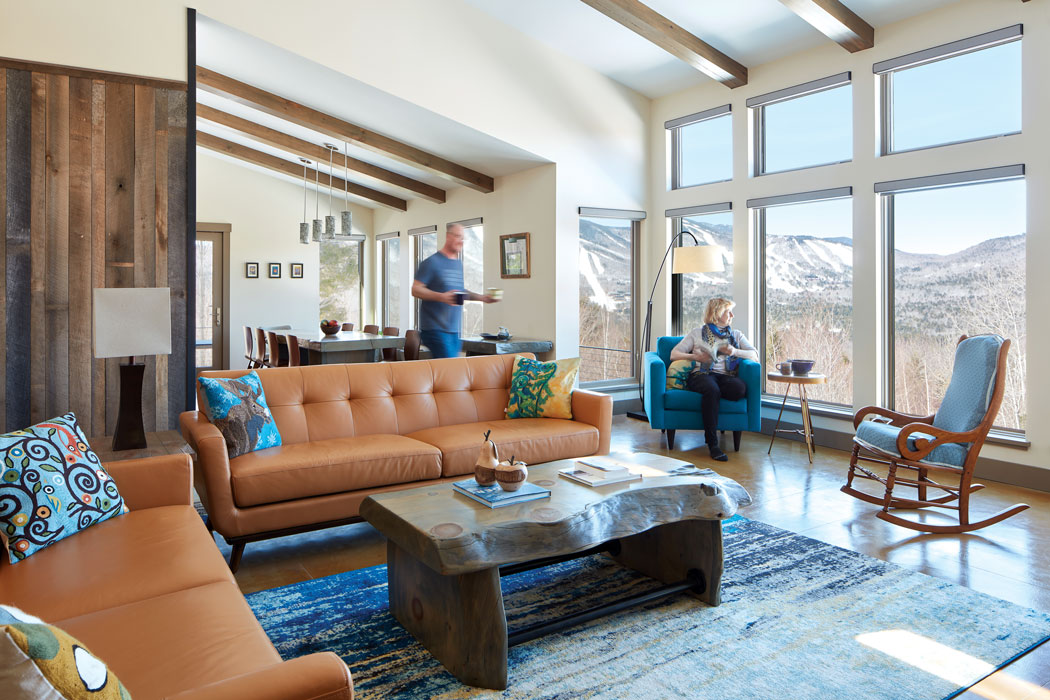 All About the View

After counting votes cast by family and friends, John and Karen Reilly christened their home “Mahoosuc View” for the mountain range that fills its windows. “When you walk in the front door, your eye is drawn toward the mountains,” Karen says. “You don’t feel overwhelmed by this house. It’s really about the view.”

The modern-rural home sits on a bluff overlooking Sunday River ski resort in Newry. Its facade comprises a series of rectangular forms in a mix of earthy materials — board and batten, vertical pine, and red-stained white-cedar shingles. The low-slope metal roof was designed to accommodate solar panels in the future.

Above: The house’s profile mimics the countours of the landscape.

Inside, John’s penchant for clean lines won over Karen’s preference for antiques, though the rustic tones appeal to her aesthetic. Their eclectic furnishings, along with white walls, floor-to-ceiling windows, russet poured-concrete floor, and a rough-sawn oak feature wall in the great room, create a warm vibe, equal parts mid-century modern and haute lodge.

“It has a modern swing to it without being chilly,” observes Eric List, project manager at Bethel-based Clearwater Builders, which designed and built the home. “The colors as well as the lowered rooflines make it feel intimate.” 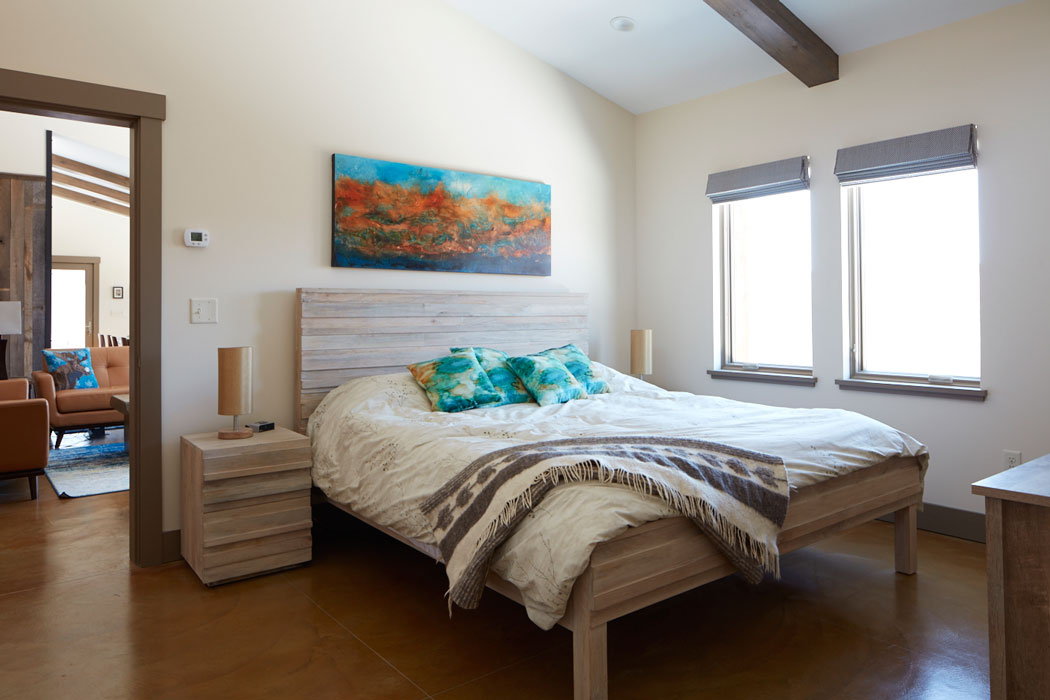 Above: Clean lines, lots of glass, and rustic wood accents allow for a strong connection to Sunday River ski resort and the Mahoosuc Range.

The couple drew inspiration from their surroundings. For example, the kitchen island’s striking waterfall-edge countertop, made with white granite that “spills” over one end, calls to mind hikes in the woods. The same granite is used on the stove backsplash. “I like to imagine we have a river cascading from behind the range, across the counter, and down to the floor,” John says.

The dining table, made of wide-sawn slabs of stained pine, is John’s design, the realization of a light-bulb idea that switched on when he saw a 12-foot-long pine log sitting outside Moe’s Rustic Furniture in Bethel. Moe Hart was able to cut enough planks from the log to build the table, as well as two end tables that can be used to extend its eight-foot length. John, who estimates from the log’s rings that the tree was 118 years old, says, “We liked the idea that Maine is the Pine Tree State and that it’s made by a local artisan.”

List is particularly fond of the staircase and steel railing, which are the work of carpenter and welder Eric Smith of Glen Cove Builders. The stain and finish were chosen for their compatibility with the wood ceiling beams.

The Boston Blend thin stone veneer fireplace, accented with Hampton limestone, is arguably the home’s showpiece. Its asymmetrical composition mirrors the slope of the roof, and the stucco chimney breaks up what would otherwise be an overwhelming mass of stone. The Denmark-made high-efficiency stove insert meets strict standards for toxic emissions, in keeping with the couple’s desire to maintain an eco-friendly footprint.

The beauty of this sleek, elegant home is that it doesn’t show off. It’s comfortable letting the mountains be the star.

Left: The Reillys want to stay in the home as they age, so communal living spaces and master bedroom are all on one floor, which can be heated by the fireplace with super-efficient woodstove. Radiant-heat concrete floors provide backup when the couple is away. The ground floor, also served by radiant heat, has a guest suite and, below the garage, a workshop.

Hyde School
We use cookies to ensure that we give you the best experience on our website. If you continue to use this site we will assume that you are happy with it.Ok